Bogtrotters on the trail of Red Hugh and Art O'Neill 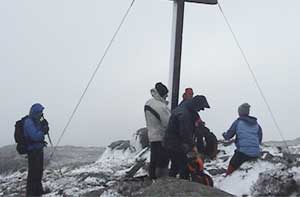 The TI Bogtrotters is a hillwalking group commemorating historical events by conducting walks through areas of historical interest, both in Ireland and abroad. The project was initiated in 2000 by members of Tar Isteach, a republican ex-prisoner group based in Dublin.
The TI Bogtrotters recently relaunched their project following a period in which it had lapsed. The aim is largely to educate people around historical events by – in so far as possible – allowing participants to get a first hand feel for what historical figures endured in the past. Here  GAY CLEARY recounts the group’s hillwalk commemorating and revisiting the escape of Red Hugh O’Donnell and Art O’Neill from Dublin Castle .

4 January 2008, Midnight. Church bells toll, dogs are howling and the odd snowflake drifts in the wind. But it takes more than a few snowflakes to put off a gallant band of hardy walkers as they head for the hills, following the route of Red Hugh O’Donnell and Art O’Neill in their escape from Dublin Castle on the “12th day” “Christmas of the star” 6 January.  1592.
In all, about 53 walkers started from the castle gates, among them a group of Bogtrotters who are no strangers to this long and arduous trek. In the meantime their backup team made their way back to base as best they could in order to prepare hot grub for the meeting in the mountains the following morning, and perhaps even have a short if unsettled sleep!
Daybreak, 5 January.  Ballinagee wood. With a strong breeze blowing and flurries of snow the various backup teams scan the frozen skyline and soon the walkers begin to arrive to a welcome hot meal and a short rest.  Our Bogtrotters are in good shape and report that the going was fairly good with only the odd snow shower and the ground frozen hard at the “haunted” Billy Byrne’s Gap.
Soon the team was rested and ready to go again and, reinforced with some keen young blood they headed for the steepest and highest point of the walk.
Following the Glenreemore brook they soon reached the wild and rugged area known as Art O’Neill’s Grave. History records that this lonely place was as far as the fugitives could struggle in the harsh weather, and their guide Edward Eustace continued over the mountains to get help, which was still many long frozen miles away. Feagh McHugh soon sent the guide back with drink, food, men and horses but alas, Art could not be revived and was buried close to where he died, Red Hugh although frostbitten in his feet was carried over the hills to Glenmalure and soon recovered.
From here the Bogtrotters faced a steep and breathtaking climb to Art’s Cross, about 500 feet above the grave, while all the time being under surveillance of a number of red deer on the snowy ridge high above.
Art’s Cross is the highest point of the walk, above 600m and the temperature was well down as the walkers struggled into a strong south west wind with low cloud and snow blowing into their faces. After some good compass navigation they soon reached the three lakes area where the water was frozen solid, from here they quickly headed for the lower ground and followed the Avonbeg river down into Glenmalure.
At Baravore the backup team was waiting and after a quick change of clothes and a bite to eat, everybody headed for the Glenmalure Hotel for refreshments.
The Art O’Neill walk is not only about remembering the past but also about meeting old friends, making new acquaintances and planning for the future. Long may it flourish. Slán