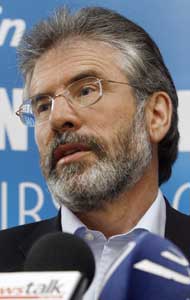 SINN FÉIN President Gerry Adams MP MLA in a New Year message said that 2007 had been a significant year.
“It witnessed momentous political progress on policing and, following a deal between Sinn Féin and the DUP in March, the Assembly, the Executive and the all-Ireland institutions were restored in May.
“Achieving this was not easy. Moreover, the legacy of decades of institutional discrimination, conflict and British direct rule mean that society in this part of the island faces enormous challenges around jobs, housing, poverty, suicide, the environment, health, education and much, much more.
“But here too progress has been made. A recent example of this was the significant initiative taken by Education Minister Caitríona Ruane to end the 11-Plus system of academic selection, and the inclusion of an explicit commitment in the Programme for Government that economic growth and Public Procurement – the buying power of the departments – will now be used to address inequality and tackle poverty.
“And, for the first time, the draft Budget, Programme for Government and Investment Strategy contains a commitment that all of these will be subject to Equality Impact Assessment.
“These are important advances but we now have to ensure that we collectively continue to make progress. There remain other vital areas of work to be completed around the Good Friday Agreement – specifically in the areas of the Bill of Rights, equality, the Irish language, the North-South bodies and the transfer of power on policing and justice.
“So 2008 holds more challenges.
“Sinn Féin is an Irish republican party. Our priority objective is Irish reunification. But we are also in the business of seeking to build the economy, North and South; to deliver strong public services; of tackling crime, drugs and anti-social behaviour; and of promoting the Irish language.
“The peace process has transformed Ireland in the last decade. It is tangible evidence that with political will further substantive progress can be made.
“Tá dul chun cinn ollmhór déanta ach ní bheidh scíste ag Sinn Féin go dtí go mbunófar Éireann Chomhionann, Aontaithe.”