Hypocrisy and denial over Britain's war in Ireland 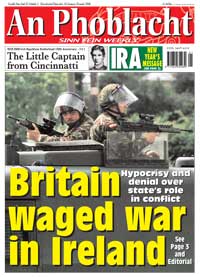 A SUGGESTION that the British state may be asked to formally say that it fought a war in the North of Ireland has sparked outrage from unionist politicians. The option is said to be one being considered by the British Government-appointed ‘Consultative Group on the Past’.
For three decades, successive British governments and the crown forces attempted to portray the conflict in the Six Counties as a ‘criminal conspiracy’.
The Six-County Junior Minister in the Office of First and Deputy First Minister, Ian Paisley Jnr of the DUP, said:
“Law and order would be turned on its head – it would be sickening and that’s why it should be rejected”.
Meanwhile, Sinn Féin’s Gerry Kelly, a junior minister in the same office as Paisley Jnr, said that it is ironic that unionist politicians, who for so many years had demanded that ‘republicans should say the war is over’, were now denying that a war had ever taken place!
While Ulster Unionist Party leader Reg Empey said,
“The reality is that the IRA were and are insurgents, who were resisted by the legitimate forces of the United Kingdom,” Sinn Féin’s Mitchel McLaughlin said the Consultative Group could “by no means be regarded as a neutral observer” as it was set up by the British Government.

Conflict of interests
The controversy over the status of the conflict in the Six Counties followed the first of a series of public meetings by the Consultative Group which was set up by former Six-County Direct Ruler Peter Hain to examine ways of dealing with the past.
Sinn Féin has said that there is a conflict of interests in the British Government as a protagonist in the conflict and its role in this process. The party has serious reservations about the group set up to examine ways of dealing with the past as it was appointed by the British Government and will report back to the British Government, which will have the final say on any recommendations. Sinn Féin says that, given that the British state was a protagonist in the conflict and not an innocent onlooker, this represents a clear conflict of interests.
Despite these concerns, Sinn Féin has met with Consultative Group members Robin Eames and Denis Bradley to outline its views and has encouraged others to do likewise.
Sinn Féin believes that the issue of truth recovery, victims and the need for a healing process are crucial matters which need to be resolved and party spokespersons have stressed a commitment to the development of a process which can deliver closure for the families of those killed during the conflict. Sinn Féin says that any such process must be victim-centred, should deal comprehensively with the issue, and ensure that there is no ‘hierarchy of victims’.