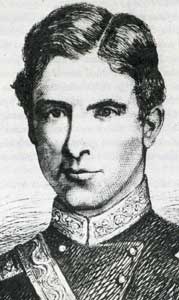 The Little Captain from Cincinnatti

WILLIAM MACKAY LOMASNEY may be little known in general historical terms but the explosive exploits of the diminutive Irish-American, a master of disguise creating mayhem for crown forces in Cork and taking the war to England, made him the sort of guerrilla leader that Michael Collins was to gain fame as 50 years later.
In this first episode of a two-part feature over this week and next, Sinn Féin TD AENGUS Ó SNODAIGH looks back at the life and death of ‘The Little Captain’.

JUST over 140 years ago, on 27 December 1867, an active service unit of Volunteers captured one of the British military’s outposts, the Martello Tower at Fota, County Cork, and emptied its weapons store.
Three days later, a gun shop in Patrick Street, Cork, was raided and during the next few days and weeks many other gin shops and coast guard stations were attacked and weapons seized. At the head of this active service unit of Irish republican soldiers was William Francis Lomasney, otherwise known as ‘Captain Mackay’ or ‘The Little Captain’.
Lomasney had been active in Ireland since 1865 in preparation for the forthcoming rising, though when he was arrested along with another Irish-American, John McCafferty, later that year, they agreed to leave the country after the judge stated they wouldn’t be required to stand trial if they left the country. Celebrations greeted the news at the time that they were released, though his freedom was to be short-lived.
He was arrested again in Liverpool within weeks, obviously still organising the Volunteers of the Irish Republican Brotherhood which had been formed seven years earlier. He was brought back to Ireland, to Mountjoy Jail, and was released again under the same conditions, that he leave the jurisdiction, which he did – though he was back in Ireland at the head of over 200 Cork Volunteers who gathered at Prayer Hill on 6 March 1867 in the north of the city to play their part in the planned rising. The column moved over the next few days through the county and the heavy snow which had fallen that week, stopping only to raid for arms, to fell telegraph poles, destroy bridges and pull-up railway lines.
They captured an RIC barracks at Ballyknockane without injuring anybody and then proceeded to burn it. During this attack, despite being fired on by the police inside, the Volunteers allowed the garrison to surrender untouched, before setting fire to the barracks. After that attack, because news had reached them of the general failure of the rising, the column dispersed, though Lomasney and others continued their sporadic raiding for arms and re-organising the Republican Army (the term ‘IRA’ was being used at this time in the USA in particular) for many months up to February 1868.
Two days after Christmas 1867, Lomasney and several other IRB men captured the fortified Martello Tower in Fota, County Cork. They held its armed guard captive while its large armoury was plundered of its arms and ammunition, though it wasn’t as full as it would be normally and the grenades which the Little Captain specifically asked the captives for were not in stock.  Four days later, on 30 December, eight IRB men entered Henry Allport’s gun shop in Patrick Street in Cork City removed 72 revolvers and other guns along with a large quantity of revolver cartridges.
A month earlier, on 28 November, Richardson’s gun shop, also on Patrick Street, was taken over and stripped of its contents: 120 revolvers and 8 Snider rifles. Other gun shops and coast guard stations in County Cork were raided in this period and many weapons were seized on behalf of the Republic.
The exploits of Captain Mackay and his unit attracted songsters, one song written about them went like this: –

The Cork men and New York men
Oh, the gallant Cork men
Mixed with New York men,
I’m sure their equals cannot be found;
For persevering
In deeds of daring,
They set men staring the world around.
No spies could match them,
No sentries watch them,
No specials catch them or mar their play,
While the clever Cork men
And cute New York men
Work new surprises by night and day.

Sedate and steady,
Calm, quick and ready,
They boldly enter, but make no din,
Where’re such trifles
As Snider rifles
And bright six-shooters are stored within.
The Queen’s round towers
Can’t baulk their powers,
Off go the weapons by sea and shore,
To where the Cork men
And smart New York men
Are daily piling their precious store.

John Bull, in wonder,
With voice like thunder,
Declares such plunder he must dislike;
They next may roll in
And sack Haulbowline
Or, on a sudden, run off with Spire.
His peace has vanished,
His joys are banished,
And gay or happy no more he’ll be,
Until those Cork men
And wild New York men
Are sunk together beneath the sea.

Oh, bold New York men
And daring Cork men,
We own your pleasures should all grow dim,
On thus discerning
And plainly learning
That your amusement gives pain to him.
Yet, from the nation,
This salutation
Leaps forth, and echoes with thunderous sound –
“Here’s to all Cork men,
Likewise New York men,
Who stand for Ireland the world around!”