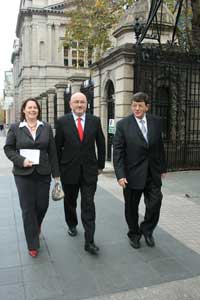 The first meeting of the Oireachtas Committee on the Implementation of the Good Friday Agreement on 22 November was to be an historic occasion with four MPs from the Six Counties for the first time participating in such a Committee in Leinster House.
The participating MPs were Pat Doherty (Sinn Féin, West Tyrone), Michelle Gildernew (Sinn Féin, Fermanagh-South Tyrone), Alasdair McDonnell (SDLP, South Belfast) and Eddie McGrady (SDLP, South Down).
Sinn Féin Dáil leader Caoimhghín Ó Caoláin, a member of the Committee welcomed its commencement. He said:
“The Oireachtas needs a greater level of engagement on the Agreement and on the new political dispensation on the island of Ireland. It must welcome, as we have done this morning, elected representatives from the Six Counties on a routine and regular basis to enhance all-Ireland democratic dialogue.
“We are approaching the tenth anniversary of the Good Friday Agreement and during that decade our country has been transformed. The peace process has seen the end of armed conflict, the Good Friday and St. Andrews Agreements have seen the establishment of an Assembly and Executive in which power is shared between Nationalists and Unionists and we have an All-Ireland Ministerial Council.
“The All-Ireland Ministerial Council and the structures for all-Ireland co-operation should be seen as opening the way to a new era of governance on this island. We have seen major progress on the demilitarisation of the Six Counties with the dismantling of British military installations and the withdrawal of the British army from the streets. A new beginning has therefore been made in a number of areas, especially in policing.
“Tá dul chun cinn déanta, ach tá a lán le déanamh fós. Mar shampla, tá na n-Aontachtaí sa Tionól ag cuir i gcoinne an feachtas atá ann chun acht teanga a thabhairt isteach sna Sé Chontae, rud a bhí geallta i gComhaontú St. Andrews. Tá neamhaird á thabhairt ar cearta na Gaelgeóirí sa Tuaisceart dá bharr sin. Mar sin, tá gá ann do feachtas pobail maidir leis an gceist seo chomh maith le ceisteanna eile. Ní féidir linn an phróiseas seo a fhágáil i seomraí coiste mar seo. Is leis an bpobal an bpróiseas síochána agus Comhaontú Aoine an Chéasta. Is ar a son atáimid ag obair.”
The Cavan/Monaghan TE said that while much progress had been made much remains to be done. He said the committee will be judged on how it helps to deliver real improvements in people’s lives, especially those communities worst affected by the Border and the legacy of the conflict. Issues that the committee must address include the establishment of the North-South parliamentary forum, the consultative civic forum, the framing and implementation of the all-Ireland charter of rights, accelerating cross-Border co-operation and integration across key policy areas, notably in health, infrastructure and job creation, the development of the Border region and the need for truth on collusion. Sinn Féin also intends to advance its proposals for a Green Paper on Irish unity to be initiated by the Government and to begin the practical planning for Irish reunification.
Since the Good Friday Agreement, Sinn Féin has argued strongly for representation in the Dáil for citizens in the Six Counties. Ó Caoláin said the party didn't  consider the new committee to be a substitute for Six County representation and that campaign will continue. As recently as last week the Taoiseach confirmed that those were also his views.
Ó Caoláin warmly welcomed “our colleague MPs, Teachtaí Dála as they are, of their respective constituencies north of the Border, who are present today to participate in the business of this committee.”
He said he looked forward to the day and was confident that “we soon will have the opportunity to extend a true Irish céad míle fáilte to Northern representation from the unionist tradition at this committee.”
The inaugural meeting saw the election of Galway East TE Noel Treacy as Cathaoirleach while Eamon Scanlon (Sligo-North Leitrim) was elected Leas-Cathaoirleach.