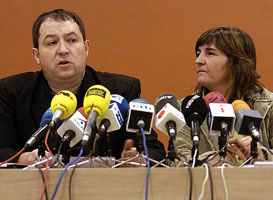 THE Basque pro-independence movement has pledged to take its campaign for ‘A Democratic Framework’ for conflict resolution “onto the streets, into the workplaces and into the universities”.
A massive meeting in Donostia – which included some of the historical leaders and activists of the party together with those members of the current leadership that have not been imprisoned by Spanish courts – heard that ‘A Democratic Framework’ is the key to creating the political change that could bring to an end the current situation of “a lack of recognition and division suffered by the Basque Country at the hands of the Spanish and French establishments”.
This is a proposal that Basque nationalist left activists are ready to take to “each neighbourhood, each village... to make it known to all Basque citizens and... to unite in a real popular offensive”.
Fullaondo said she wanted to send two clear messages to “all Basque nationalist left and democrats” of the country.
“First of all, we reaffirm the commitment to work for the rights of this people. Secondly, we will keep working towards our political project – independence and socialism. Despite all aggression and all obstacles, we will not step back when it comes to achieving our objectives.”
She continued:
“In our hands we have a proposal made by the people and for the people, and [the Establishment] will not silence us. They will try to misrepresent it and to silence our proposal but, with the citizens’ commitment, work and struggle we will overcome all obstacles. The proposal will be presented on the streets, in the workplaces, in the schools and in the universities.”
The pro-independence spokesperson reminded people that the Spanish Government “only offers repression and the imposition of a constitution whose final objective is to close the doors to independence”.
From Fullaondo’s point of view, the conservative PNV Basque Nationalist Party’s strategy serves to reinforce the Spanish strategy as its framework does not consider the possibility of independence for the Basques but “an agreement that closes the door to independence” and reinforces the partition of the Basque territories.
In relation to the creation of a democratic framework, Barrena pointed out to the necessity of an agreement between the “Basque political, social and economic agents”. Initially, the proposal includes a referendum for citizens to decide on the reunion of the provinces under Spanish rule that are, at the moment, divided under two different autonomous administrations. Then those Basque territories under French control can decide if they want to join them.

THE Democratic Party of Kosovo, led by Hashim Thaci, a Kosovo Albanian former guerrilla leader, has won the breakaway province’s parliamentary election, according to unofficial results.
Thaci has promised to declare formal independence from Serbia after 10 December, the UN deadline for Albanians and Serbs to reach a deal on government. Already, foreign ministers from several EU countries have urged Kosovo Albanians not to declare unilateral independence and have threatened to isolate the new state.
Kosovo Serbs, who want to remain part of Serbia, boycotted the elections

OPEC (the Organisation of the Petroleum Exporting Countries) has pledged to provide the world with reliable supplies of oil and fight global warming.
The final statement of the OPEC summit in Saudi Arabia last weekend made no mention of calls by oil-consuming countries such as the United States to raise production to ease sky-high prices. Venezuela’s President Hugo Chavez warned at the beginning of the summit that oil prices could double if the US went ahead and attacked Iran.

THE Association of South East Asian Nations (ASEAN) has rejected a US Senate call to suspend Burma from the organisation over the crushing of recent democracy protests.
At its summit in Singapore this week, ASEAN did express its “revulsion” at the military regime’s suppression of protests and called for such repression to end but ASEAN Secretary-General Ong Keng Yong said that suspending Burma would have little effect as the Rangoon regime is happy with isolationism. Using the country’s official name of Myanmar, Ong said:
“The Myanmar guys are quite happy to be left alone. They are not scared; not afraid of being isolated. They can just shut their door and go into hibernation.”
ASEAN, he said, does not advocate a confrontational approach and it would use its own criteria when judging other members.
“The rest of the world think they know what is good for all of us.”
ASEAN is made up of Brunei, Cambodia, Indonesia, Laos, Malaysia, Myanmar (Burma), the Philippines, Singapore, Thailand and Vietnam.

A JAPANESE whaling fleet has set sail, aiming to harpoon protected humpback whales for the first time in decades.
The fleet is conducting its largest hunt in the South Pacific with instructions to kill up to 1,000 whales, including 50 humpbacks. The humpback hunt is the first since a mid-1960s global ban and has drawn strong protests from environmentalists.
Commercial whaling was stopped in 1986 but Japan is permitted whaling in the name of scientific research.