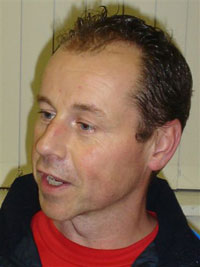 CROSSMAGLEN’S quest for another Ulster club title continued apace last Sunday when they overcame Dromore by a point. Cross’ seem to enjoy nothing so much as a tight finish and it is very rarely indeed that they come out the wrong side. They face St Gall’s in the final on Sunday in Newry and it promises to be a fascinating denouement.
Crossmaglen are dogged and have the ability to make even limited possession pay upfront. Gall’s try to play in the same way that has made them so formidable in seven-a-side: move the ball quickly into the danger area. That approach paid rich dividends two years ago and took them to the final, where they were beaten by Salthill of Galway. Lack of experience counted against them then but they may have learned enough to make them worth backing at 6/4.
If Cross’ can lay claim to being the best club football team of recent years – and, along with the other Rangers, of Nemo, one of the two best of all time – then Birr have few challengers for the hurling laurels.
They beat one of those, Ballyhale Shamrocks (minus Henry and Cha), in the Leinster semi-final and now face Ballyboden St Enda’s in what will be their eighth final. They have won it on six previous occasions and have gone on to win the All-Ireland four times, a feat only equalled by their Kilkenny rivals.
Brian Whelehan also has the unique and unlikely to be equalled, distinction of having been on all of the Birr winning sides. At 36 he has retreated into the forwards although he still ostensibly starts in the half-back line where he earned his place on the Team of the Millennium. He confesses to feeling less pressure now, not having to “chase after young fellas” (not in a Truman Capote sense, obviously).
Birr now face Dublin champions Ballyboden, who have followed on from their first-ever Dublin title by battling their way to the final, the first team from the capital to do so in over ten years. Oh, and before any pedants reach for their monogrammed vellum writing paper, UCD are NOT a Dublin team. They are to Dublin hurling what blue tongue disease is to our ovine friends.
Ballyboden are replete with Dublin county players, either current or former, and epitomise the shift that has taken place in Dublin hurling towards the suburban southside. They also boast the talents of Conal Keaney, who has been excellent this year and may perhaps finally be tempted away from the cruder code to again do what he is really good at in the sky blue.
They have overcome two tough teams in Oulart the Ballagh of Wexford and Laois’s Camross, but Birr may represent a step too far for a team still serving its apprenticeship. On the other hand, they have lots of players who are used to beating Offaly teams so they will not lack confidence.

Returning to Crossmaglen, someone was wondering recently why they wore the same colours as Kilkenny. Good question. In fact, as far as I can make out, Cross’ were wearing black and amber before Kilkenny, right back to 1909. I have seen photographs of Kilkenny teams after that date in a different strip but I am open to correction. Kilkenny were presented with their first black and amber jerseys by Fr Drennan of Danesfort and that club, which wears the same colours, was only founded in 1922.
Black and amber stripes are found in a lot of counties. Off the top of my head I can think of Naomh Mearnog in Dublin and Upperchurch-Drombane in Tipp. And, of course, two of Kerry’s best-known sides, Dr Croke’s of Killarney and Austin Stack’s of Tralee, wear the same colours in hoops. Round Towers of Kildare – home of the famous Glenn Ryan who was coached by ourselves in Portlaoise Jail in 1993! – wear black and amber stripes. Then there’s Peter’s of Dunboyne and Dunshauglin, both in Meath; Strokestown in Roscommon; Pomeroy Plunkett’s of Tyrone; Roger Casement’s of Porglenone; Na Piarsaigh of Cork; Coa O’Dwyers in Fermanagh. And, no doubt, there’s a good few others I have overlooked.
The origin of the black and amber appears to have been the republican sunburst and there is usually a strong republican connection with the clubs that sport those colours. Whether that goes back to those like Croke’s of Killarney, which was founded in 1886 with a strong Fenian influence, or Pomerory Plunkett’s, founded in 1916 in honour of Joseph Plunkett, or Na Piarsaigh, who are a relatively new club, founded in 1943 by a group of republican-minded gaelgoirí on the northside of Cork.
Of course, the most popular colour both at county and club level is some combination involving green. And quite often green and orange or green and gold. Sometimes the green is combined with black, usually as a mark of remembrance for the republican dead.
That is certainly the origin of the black band on the Erin’s Isle jersey. The club was founded in 1917 by Jem Moloney and other Finglas IRA Volunteers who had been released from prison and internment. The black being to commemorate the dead of the Easter Rising. Nemo Rangers of Cork have an almost identical strip and were founded in 1922 with, I’m guessing, a similar explanation.
Parnell’s of Donnycarney in Dublin date back to the late 1880s and their black jerseys with a green band were earned in a match at Parnell’s home in Avondale in 1888 against a team called Parnell’s from Dundalk who wore the same colours. The Dublin Parnell’s won and kept the jerseys.
So, behind every jersey there is an interesting story. Sometimes the origins, however, are more prosaic. According to one account, Dublin’s sky blue came about only because the person who was washing the originally darker blue jerseys left them to boil for too long!