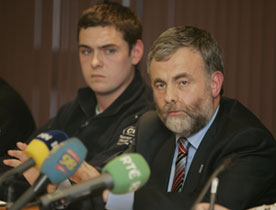 Agency worker Conor O'Gorman with SIPTU General President Jack O'Connor, at the Liberty Hall launch of the Campaign for Justice for Agency Workers

THE launch of a trade union campaign this week by SIPTU to improve agency workers’ rights was attended by Sinn Féin’s Arthur Morgan, who called on the Irish Government to introduce legislation to provide equal treatment for agency workers.
Morgan, the party’s Enterprise, Trade and Employment spokesperson, was speaking in advance of attending the SIPTU launch in Liberty Hall last Monday.
He said:
“We have 520 employment agencies in a state with just over four million inhabitants. Compare this to Poland, where there are only 770 agencies representing 40 million workers and you will see that we have a disproportionate number of workers being employed in an atypical fashion, which is the cause of numerous problems.
“Recent research on British agency workers showed that, on the whole, they were paid only 68 per cent of the directly employed workforce’s earnings; had less entitlements; are younger on average than the directly employed workforce and have less control over the work they do.”
The Louth TD pointed out that the 26 Counties is one of only three states that have not legislated to provide equal treatment for agency workers. As a result, there are a growing number of complaints of exploitation and abuse.
“We have to ask why we need such a large number of agencies and who is benefiting from them? I am calling on the Government to introduce immediately legislation that will protect the rights of workers to equal pay, pensions and other benefits awarded to those directly employed by companies.”
An Phoblacht
44 Parnell Sq.
Dublin 1
Ireland