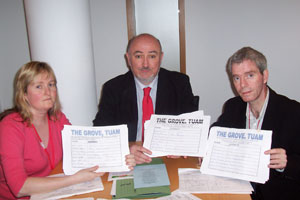 HEALTH MINISTER Mary Harney has received a petition containing the signatures of 2,505 people in Tuam calling for the reinstatement of health services in the former Grove Hospital.
Campaigners Francis Hopkins and Gráinne Morahan travelled to Leinster House on Wednesday, 14 November, where they met Oireachtas members and handed in the petition to the minister.
Cancer survivor Francis Hopkins said that, with the plan to relocate cancer care to eight centres of excellence throughout the country, and with University College Hospital Galway (UCHG) being one of these centres, the reopening of the Grove Hospital in Tuam “could and would help alleviate the already overflowing waiting list in UCHG”.
Francis and Gráinne told the TDs they met that the Grove could be used as a respite and convalescence centre. It could also facilitate an outpatients’ clinic to cater for the North Galway/South Mayo dental service that was only recently moved from Tuam to Galway. They have suggested the use of the Grove for a range of primary care and other health services to the people of Tuam and surrounding areas.
In reply to a Dáil question from Caoimhghín Ó Caoláin TD, Sinn Féin’s Health & Children spokesperson, Health Minister Mary Harney said she has had discussions with the Health Service Executive with a view to advancing the proposal to reopen the Grove Hospital as a healthcare facility.
In Leinster House, the Tuam campaigners met East Galway Deputies Ulick Burke, Tom Kitt and Noel Treacy. There were apologies (due to illness) from Deputy Paul Connaughton.
“We will continue to press the Minister to ensure that the HSE reopens this potentially excellent health facility,” Francis Hopkins said, “and we urge all elected representatives and everyone in Tuam to do so also.”