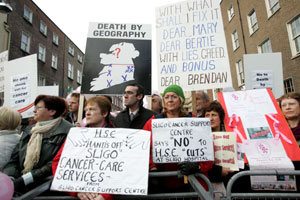 Speaking at a major demonstration outside Leinster House on Wednesday demanding that breast cancer services be maintained at Sligo General Hospital,  Sinn Féin Health Spokesperson Caoimhghín Ó Caoláin TD said the crisis in mammography is being used by government and the HSE to justify their drive to over-centralise hospital services while downgrading local hospitals.
Addressing protesters Ó Caoláin said:
“Your protest here today underlines the fundamentally flawed nature of the Government’s plan for a very limited number of cancer care centres, all of which are on or south of a line between Dublin and Galway. Vast areas of the country are being left out in the cold, including the North West and the Border counties which I represent.
“Minister Harney and the HSE are presiding over a chaotic situation in cancer care. Cancer services in local hospitals are being closed with no adequate alternative provided.
“Services are being taken away with only the promise that better services at some time in the future at the long-promised centres of excellence. I have not heard anyone speaking in opposition to centres of excellence, despite the misrepresentations of Professor Brendan Drumm. I have not heard anyone say that there should be centres of excellence for cancer at every hospital in the country.
“What has been rightly demanded is that existing cancer services cannot and must not be taken away in the absence of centres of excellence. That is what this Government and the HSE are trying to do.
“The current crisis in mammography is being used by the Minister and the HSE to justify their drive to over-centralise our hospital services and downgrade local hospitals. That is a disgrace and is the opposite of what is needed. The women concerned need answers as to what went wrong. Women need these services to work and be seen to work.
“What is needed urgently by our whole population is comprehensive cancer care provided in the public healthcare system and available to all based on need alone, regardless of ability to pay and without discrimination based on geographic location. Nothing less is acceptable.”