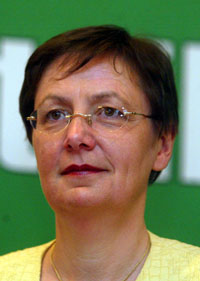 26-COUNTY Environment Minister and Green Party TD John Gormley is in the middle of a political storm this week following the granting of permission by An Bord Pleanála for a deeply controversial incinerator in Dublin. During the general election, Gormley promised to oppose the incinerator, in his own constituency of Dublin South-East, and appeared on pickets with anti-incinerator campaigners.
Sinn Féin’s Dublin spokesperson on the Environment and local councillor, Daithí Doolan, expressed “deep disappointment” at the An Bord Pleanála decision on Monday to grant permission for the Poolbeg incinerator.
Speaking in Ringsend, where the incinerator will be built, Daithí Doolan said:
“Local people are angry and disappointed but definitely not beaten.
“This is a huge blow to the community. Anyone who took a look at the facts will know that no incinerator should be built here. Incineration is an industry that is well past its sell-by-date. It is 10 years since this plan was first proposed. New waste technology has bypassed incineration and yet we are now condemned to have an age-old industry imposed on this community.
“Those of us involved in the long campaign against this incinerator had hoped a Green minister in government would have brought a change of policy but, unfortunately, this is not to be. Those of us still committed to winning the campaign must now redouble our efforts and ensure that the Environmental Protection Agency does not grant a licence to the plant.
“This city faces a waste management crisis but to continue to bury and burn our waste is a deeply flawed and totally unacceptable policy. We must rule out the option of incineration and invest in a programme to reduce, reuse and recycle our waste.”
The decision by An Bord Pleanála to clear the way for the €250m plant on the Poolbeg Peninsula comes just weeks after the Green Party minister again insisted it was not needed.
On his own website (johngormley.com) the Environment Minister said:
“We have been very clear that in government this incinerator will not go ahead. I believe that the planning case against this incinerator is unanswerable.”
However, An Bord Pleanála agreed with Dublin City Council officials that the plant could process up to 600,000 tonnes of waste a year and provide heat and power for 100,000 homes.
Gormley confirmed that two incinerators have been approved in the 26 Counties while six remain within the planning system.
“We have over-capacity now,” he said, referring to the 600,000 tonnes annual capacity of Ringsend and the 200,000 tonnes likely to be supplied by Carranstown in County Meath, granted approval for an extension last month.
Another incinerator, in Ringaskiddy, was given planning approval in 2004 but has been delayed due to challenges.
John Gormley has even come under pressure from within his own party on the issue. Green Party chair Senator Dan Boyle said:
“This decision goes against Green Party leader and Minister for the Environment John Gormley’s recent statements that incineration is no longer the cornerstone of Government waste management.”
Residents in Dublin South-East say the decision will have severe adverse effects on their community with lorries carrying waste to the plant causing massive traffic congestion in an already-congested area.
In its ruling, the board upheld an inspector’s recommendation that said the incinerator should be approved but it over-ruled his concerns about the capacity of the plant.
The inspector recommended the treatment of 500,000 tonnes of waste a year at Poolbeg but the board has raised that amount to 600,000 tonnes.
Meanwhile, Sinn Féin MEP Bairbre de Brún – who was in Dublin on Monday for a range of meetings as part of a high-level delegation from the European Parliament’s Committee on the Environment, Public Health and Food Safety – said:
“Waste management is a key issue facing Ireland, North and South, in the time ahead.”
De Brún who is shadowing this important portfolio at EU level continued:
“Today’s meeting with Minister John Gormley and environmental organisations will provide important opportunities to clarify how the Irish Government will act at EU, national and local levels.
“We need to emphasise the prevention of waste, along with reuse and recycling. Incineration is one of the least environmentally friendly options. Ireland needs to put major resources and policy emphasis on the more positive levels of the waste hierarchy.”