Interview : Jim Monaghan of the Colombia Three on the launch of his new book 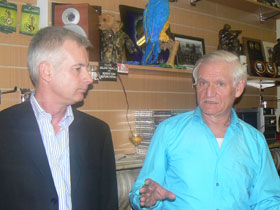 Sinn Féin’s Seán Crowe with Jim Monaghan at the launch of his book Colombia Jail Journal, at the Sinn Féin Bookshop in Dublin on Tuesday, 20 November

JIM MONAGHAN (62), from, Rathmullan, County Donegal, is one of three republican former prisoners known as the Colombia Three. Last Tuesday, he launched his book, Colombia Jail Journal, published by Brandon, in the Sinn Féin Bookshop in Dublin.
Jim talks to ELLA O’DWYER about his vivid account of the often harsh and dangerous prison conditions in which the Colombia Three — Monaghan, Martin McCauley and Niall Connolly — were held for four years in Colombia.

AN PHOBLACHT: Your book is a jail journal. What is the importance of recording the jail experience?
JIM MONAGHAN: I wanted to record the story, to tell what happened to us and what was happening in Colombia during the time we were there.
I felt I owed it to the Colombian people because the ones we came into contact with were, in the main, very kind, open and friendly and I wanted to tell people here what Colombia is going through.
There’s been a civil war going on there for the last 40 years; our civil war lasted only two years and that was vicious. The oligarchy in Colombia, consisting of 50 or 60 families, effectively owns everything in the country, including the political system.
I also feel it is crucial that history be written and for former political prisoners, for instance, to write their story. The recording of history is very much a part of political struggle.

You’re an Irish republican who’s spent time in numerous jails, in Ireland and England, in the 1970s and 1980s. What was it like when you found yourself arrested in a place so far overseas and facing yet another prison sentence? What thoughts went through your head?
At first I thought we’d only be facing extradition or charges relating to passports. I figured we were in trouble but not that much trouble. Then, when it transpired that the Colombian Military Police were fabricating evidence against us, I knew we were up against a serious problem. We had thought at the time that we could be out in a week or two weeks and certainly before Christmas. We ended up spending three years in jail and one year out on bail in Colombia before getting back to Ireland in 2005.

How did jail conditions in Colombia compare with your previous prison experiences?
We were in several jails. Initially, we were taken to Bogota military barracks and the first actual jail we were moved to was the La Modelo in Bogota. It was a large, dark place consisting of an extensive series of buildings with guards surrounding the perimeter walls and we were held in a high-security block.
I was expecting a lot of hostility from the guards and was surprised to find that we didn’t get a hiding, maybe because there had been so much publicity around us.
For the first three weeks we were locked up all day and only let out to make five-minute phone calls. The only communication we had with the other prisoners was by shouting over to them.
The sleeping accommodation consisted of a raised area on the floor about six inches high, on which a prisoner would sleep.
Our lives were in regular danger from right-wing paramilitaries and we’d be moved around between various jails and holding centres. At one stage we were moved from Modelo to a police holding centre run by DIJIN (the Central Directorate of the Judicial Police and Intelligence) because of dangers to our lives. Conditions were very bad there because it was only designed for holding prisoners until their trials, for up to two or three days.

You must have wondered what your future held.
Once the realisation set in that matters were serious the focus became one of survival. We set about keeping healthy. It was a very confined space. Niall and Martin would do exercises and I’d walk up and down and up and down. It was essential to keep in reasonably good physical condition.
The Colombia Three Campaign started up at home a number of weeks later, headed up by Caitríona Ruane, and we started to organise legal representation. There are so many people to be thanked, from those heading up the campaign to people who did sponsored walks and fund-raisers to help our families travelling over for visits and to pay for legal fees.
The first lawyer we got was a Colombian state lawyer and we weren’t sure we could trust him for that reason. We eventually got in contact with human rights lawyers based in Colombia and our legal challenge began.

Would you say that prison conditions in Colombia were better or worse or on a par with jails in Ireland and England?
What I noticed very much was that the Colombian guards were okay, friendly even, on a humane level. They didn’t practice the kind of petty treatment that you’d get in English or Irish prisons. Conditions were bad but more due to neglect, corruption or lack of money. There wasn’t systematic maltreatment.

While you were in jail had you decided you’d write a book?
I didn’t actually think of myself as writing a book. There was a guerrilla prisoner there who’d lost both hands in an explosion. He was gradually learning to write again by holding the pen between the stumps of his wrists. He used to ask me about the political situation in Ireland and its misrepresentation, saying that his own struggle too was being misrepresented by the media. Anyway, I persuaded him to write his life story and gradually the idea of writing a book myself arose. He wrote the book and it’s now being translated into Irish.
I was always preaching to people to record our history, that it is part of the struggle. I believe it’s crucial not to allow for misrepresentation.

What are your saddest memories of that period of your life?
I found it hard to leave the other prisoners behind, both when we were moved from one jail to another in Colombia and then when we were leaving jail there for the last time.

And your happiest memories?
Visits were happy times but a big concern for us was the potential danger to our families when they’d come to visit because they too could be targeted.

What are your reflections on it all now, Jim?
Having come through the experience I can say that it broadened my horizons greatly. It was the experience of a lifetime in a way – though it could have gone very, very seriously wrong. But I had the chance to see the republican struggle from a wider, outside perspective.
Very, very many of the Colombians I met were aware of our struggle. They would have been aware of Bobby Sands, for instance. They held the Irish Republican Movement in great esteem and looked to us for a kind of leadership.

• Colombia Jail Journal, by Jim Monaghan, is published by Brandon Books and is available online or by post, price €15 from the Sinn Féin Bookshop, 58 Parnell Square, Dublin 1, and from all leading bookshops.