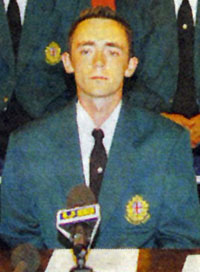 A FORMER British soldier who acted as a spokesperson for the breakaway South East Antrim UDA was a Special Branch agent. Jon McDowell admitted to a Northern based Sunday newspaper two weeks ago that he worked as a Special Branch agent for three years and passed on information to Special Branch about the loyalist killer gang.
Just days earlier, McDowell who also revealed he served in the British army’s Royal Irish Regiment (RIR) before joining the UDA, fled his Carrickfergus home fearing his cover was blown.
However, McDowell’s admissions, that he joined the UDA after a three-year spell in the British army, raise more questions than answers. McDowell’s situation is similar to that of Brian Nelson, the UDA intelligence officer who set defence lawyer Pat Finucane up to be assassinated; he also served as a British soldier.
Colonel Gordon Kerr of the Force Research Unit (FRU) recruited Nelson as an agent supplying him with information that was used by the UDA to target and kill many nationalists and republicans.
McDowell claims he was beaten in 2001 by a UDA gang who forced him to join the organisation. Instead, he fled to England where he enlisted in the RIR. The loyalist then returned to the Six Counties and his home in Carrickfergus, where he maintains the UDA caught up with him and pressured him to join up. At this point McDowell says he went to the PSNI to report the beating from three years a beforehand. While in Newtownabbey Barracks McDowell was approached by Special Branch and agreed to work for them.
It is surely no coincidence that in the three years that McDowell worked as a special branch agent the split between the mainstream UDA and its South East Antrim faction escalated and lead to violence.
If McDowell’s role was to destabilise the UDA in South East Antrim then he seems to have succeeded given the violent confrontations that erupted in the Carrickfergus area since the summer.
In one of his last acts before he went into hiding McDowell was one of three members of the South East Antrim UDA who brought a number of guns to Ballykinlar British army base in County Down to be decommissioned.
The guns were destroyed under the remit of General John de Chastelain’s international decommissioning body. The information was leaked to the press, most likely by McDowell, forcing the breakaway group into a denial.
It may have been this incident that lead to the finger of suspicion being pointed at McDowell who sensing he was in danger went into protective Special Branch custody.
He is now believed to be undergoing a debriefing by his handlers after which he will be spirited out of the North and a new life in England.
An Phoblacht
44 Parnell Sq.
Dublin 1
Ireland