UDA claims end to all its violence and criminality 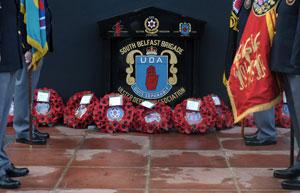 THE UDA chose British Remembrance Sunday commemorations throughout the North on Sunday, 11 November, to announce that it was ending violence and criminality.
The timing of the statement was seen as significant considering the close association of many within the unionist community with Armistice Day.
A statement from the UDA leadership, read out at memorials, announced the standing down of UFF death squads at midnight. The UDA said the decision had been taken in recognition that the military war was over and “a new and more complex battlefield” had emerged.
The UDA also called on all its members to desist from crime and criminality and claimed those engaging in crime within its ranks would be rooted out.
“It is the duty of every member to understand that to be involved in crime or criminality is to undermine the cause,” the UDA statement said. “There have been those who joined our ranks for crime and self gain. These people must be rooted out and never be allowed to breathe in our ranks.”
The involvement of the UDA in the death of North Belfast teenager Dean Clarke just a few days earlier had sparked outrage within the local unionist community. The 16-year-old hanged himself after taking illegal drugs (believed to have been horse tranquillisers) supplied by the UDA in Tiger’s Bay.
The statement acknowledged the prevalence of illegal drug dealing within the ranks of the UDA.
“These people have been involved in drug dealing and this must be stamped out. Drugs destroy our children and our children are our future. These people aren’t loyalists, they are criminals. There is no place in the organisation for such people,” the UDA leadership said.
The statement also claimed that all weaponry was to be put beyond use and all intelligence materials destroyed. The UDA refused to engage in formal decommissioning on the grounds that the weaponry wasn’t theirs but “the people’s” and unionist communities did not support decommissioning.
“Ninety per cent of people in the loyalist community don’t want decommissioning. They are not the UDA’s guns they are the people’s guns. They don’t want to give them up because they don’t trust people yet,” said the statement.
In fact, unionist paramilitaries have become such a scourge within their own communities that it is difficult to envisage any popular support for the maintenance of their lethal armoury.
Cynics might equate the UDA’s refusal to disarm with the organisation’s propensity towards feuding and internecine violence. In the past, tensions within unionist paramilitaries have often been played out through engaging in sectarian violence.
The UDA statement added:
“The UDA is committed to achieving a society where violence and weaponry are ghosts of the past. The UDA believes that the war is over and we are now in a new democratic dispensation that will lead to permanent political stability.”
Describing the political institutions and parties as “still in a period of change” and the UDA as “in a process of transformation”, the UDA leadership envisages the ultimate achievement of a society “based on equality, justice and inclusivity, where no sections of our people are left behind, regardless of religion, politics or identity”.
UDA leader Jackie McDonald acknowledged that the only way forward is political and said the loyalist community must now get involved in politics. But if the UDA is hoping for a political resurgence within the electoral wards most closely associated with the organisation, it’s going to be an uphill struggle. According to statistics, 50 per cent of people in some of the poorest unionist estates haven’t even registered to vote.
Despite recent adverse comments by the Assembly First Minister, Jackie McDonald said he agreed with Ian Paisley’s decision to go into government with Sinn Féin.
“I agree with what Ian Paisley did. He had to do it. We have to have an Assembly. Whatever the price, we have to move on.”
Sinn Féin President Gerry Adams said his party welcomed any effort by the UDA to commit itself to peace.
“We are very mindful, however, that the UDA was established by the British Government, that it was a front for them and that it is consumed in criminal activities including drug pushing. There can be no tolerance for this.
“Attempts to bribe organisations like this, as the British did in a very cynical way, are unacceptable. What the UDA needs to do is get off the backs of the unionist people and remove itself as a threat to those ordinary Catholics who have most often been its victims.”