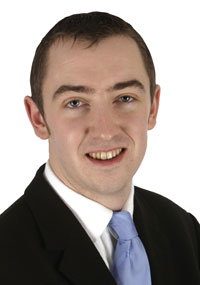 NORTH ANTRIM Sinn Féin Assembly member Daithí McKay has expressed his “extreme concern” last week at Environment Minister Arlene Foster’s handling of the application from Seaport Investments for a private visitors’ centre at the Giant’s Causeway.
McKay was speaking after a letter from the chief executive of the Planning Service to Moyle Council confirmed that he had “conveyed [a proposal] on behalf of the developer” to the council.
Initially, Arlene Foster dismissed the Sinn Féin MLA’s claim of “irregular behaviour” as “utter rubbish” and accused McKay of “petty party-political point scoring”. But within days of the denial, the Department of the Environment confirmed it had conveyed an offer on behalf of Seaport.
Planning Services CEO David Ferguson admitted writing to Moyle Council to “set out the proposal on behalf of the developer”. According to the letter, the offer involved a compensation package if the council agreed to demolish existing facilities at the site.
The Giant’s Causeway is a world heritage site and revenue from tourism is currently retained within the public purse. Controversially, a decision to privatise the site would not only hand over a place of international significance but also channel the revenue it enjoys into private hands.
Daithí McKay said:
“The Environment Minister said earlier this week that the claim I made that the Planning Service conveyed plans on behalf of Seaport Investments to Moyle Council were ‘utter rubbish’. This letter from the Chief Executive of the Planning Service totally contradicts what the minister said and confirms that the claims I made were totally true.
“What is also clear is that the deal that Seaport Investments is offering Moyle Council is absolutely dismal and will result in the council losing all revenue which it currently generates at the Causeway site.
“The minister must now inform the public why she lied about this issue on Monday, why senior officials from the Planning Service asked that this matter be discussed in private at the council meeting, and why the chief executive of the Planning Service, by his own admission, conveyed development proposals on behalf of Seaport Investments.”
Meanwhile, it has emerged that lawyers acting on behalf of Seymour Sweeney wrote to Arlene Foster on the day she announced her preliminary approval for his Giant’s Causeway plans. The letter is dated 10 September and stamped “received” on that date but the minister has denied seeing the letter.
The letter detailed the five-year history of the company’s application for a new visitors’ centre and called for a prompt decision. But the planning department has claimed that the minister did not see the letter prior to her announcement that she was “minded to approve” the private development.
A DOE spokesperson said:
“The minister did not have sight of the correspondence from Carson McDowell Solicitors dated 10 September 2007 prior to making her announcement.”
The DUP minister has also been challenged to review her department’s handling of a prior development by Seymour Sweeney that provided a second home for party colleague Ian Paisley Jnr.
A decision was taken by the then minister, the Ulster Unionist Party’s Dermott Nesbitt, to ignore opposition from his department’s Environmental and Heritage Department and award planning permission to a row of holiday homes close to the Causeway on a site designated as an area of outstanding beauty.
On Wednesday, after receiving a copy of restricted minutes of a private meeting between Nigel Dodds and Arlene Foster in June under a Freedom Of Information request Daithí McKay said it is now crystal clear that Foster was ‘minded’ to approve the private sector application for a Visitors’ Centre at least three months before she made a statement on the matter and before she had even seen papers regarding the application.