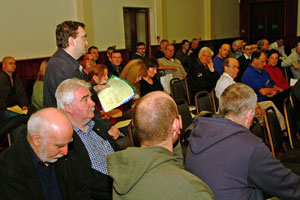 ‘Get the republican message out on the streets’

THE two final cuige conferences held by Sinn Féin to revitalise the party and begin the political fight-back after the 26-County general election took place last weekend in Munster and Dublin.
Republicans from all over Munster met in Mallow and packed a conference room to hear North Kerry TD Martin Ferris rally republicans with an inspiring speech.
“We fought the British Army to a standstill and forced them to the negotiating table,” the former IRA activist said. “Our goal is still a united Ireland and it is now up to the people here today – and our supporters all around the counties – to carry on the struggle in its new phase and to its successful conclusion.
“We want a united Ireland of equals – and we will settle for nothing less.”
Munster cuige chairperson Arnie O’Connell emphasised the need for the party to continue building in all parts of the province. And there must be increased professionalism in Sinn Féin, he said.
“Don’t be afraid of change and don’t shy away from new ways of organising or doing things. Old excuses like ‘We’ve always done it this way’ are no good any more. Just because we did it one way doesn’t mean that there isn’t a better way.”
Sinn Féin President Gerry Adams noted the solid base for Sinn Féin in the general election must be built on and expanded at all levels.
Regional co-ordinator Ken O’Connell and Leas Ard Rúnaí Declan Kearney outlined the challenges facing republicans and the strategic frameworks that members need to absorb to realise the opportunities that lay ahead for Sinn Féin in next year’s EU Reform Treaty referendum and the local elections in 2009.
South Kerry general election candidate Lynn Ní Bhaoigheallain outlined how the cuige strategy is to be implemented. Delegates broke into workshops to debate practical proposals before Councillor Toireasa Ferris closed the conference with a rousing republican call on activists to take an active part in this weekend’s national conference.
The Munster meeting concluded with delegates being led by Councillor Cionnaith Ó Suilleabháin of Clonakilty in a rendition of Amhrán na bhFiann.

IN DUBLIN, comrades from across the city came together to debate and agree a workplan to be aggressively pursued to ensure the party regains its political momentum in the capital city.
Dublin organiser Ciarán Doherty opened the conference. He was followed by a practical presentation on the role of an activist on the city’s political stage by Dublin TD Aengus Ó Snodaigh.
Deputy Ó Snodaigh said that members should take their inspiration from the Fenians who, despite some setbacks, came back each time more determined and focussed than ever before.
He also pointed out the necessity of increasing membership and integrating in every aspect of our communities.
National Chairperson Mary Lou McDonald marked out in no uncertain terms the challenges and huge opportunities the Dublin organisation has before it.
The Dublin MEP said:
“Republicans have demonstrated time and time again our commitment to our national objectives. However, Dublin has a vital role to play in achieving these goals.
“As the only party likely to oppose the EU Reform Treaty, activists here today will have the responsibility of leading a robust campaign in defence of Ireland’s sovereignty, neutrality and civil liberties.
“Be in no doubt that the direction of current EU economic policy is to advance the agenda of deregulation, privatisation and low public spending.
“The delivery of equitable public services, safe communities, delivery of social and affordable housing, a first-class health service and a vibrant economy that works for ordinary people are all cornerstones of modern republicanism.
“It is our job to make sure that, come the 2009 local elections, the people of this city know and understand our vision for Dublin. We are the only party that can truly deliver an agenda of change in the interests of ordinary people. We know that now we need to get back on the streets and ensure communities throughout the city know it too.”
Eamonn Nolan outlined key targets for the Dublin cuige, such as not just maintaining membership but doubling it.
Increasing the number of city and county council seats at the next local elections was also noted as a key element to the strategy for Dublin around which key campaigns on community safety, health and the EU Reform Treaty will be built.
Delegates at both conferences left their respective events with a clear sense of purpose.
Mary Lou McDonald said:
“Activists’ resolve has been inspiring and confidence in our collective ability to progress republican politics the length and breadth of this country is stronger than ever. Our unity is our strength. Our determination is our inspiration. Together we will build a united Ireland of equals.”