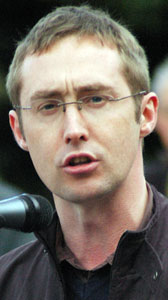 Getting it right on the European Union

IN an interesting article in last week’s An Phoblacht, Martin McGovern argued that Sinn Féin should restate our position on Europe to one of “critical support”. I want to take issue with his article and respond to the main points on which his argument rests.
Martin argues that our debates on the EU have been “conducted on a 26-County basis”. This is not true. The evolution of Sinn Féin’s EU policy has always been set in an all-Ireland context. The fact that we have two MEPs and an all-island European department has meant that, when discussing and debating matters such as the Services Directive or the EU Constitution, our focus was on the impact of such issues on the island as a whole.
Martin says that Sinn Féin should call for an all-Ireland referendum on the new Lisbon Treaty. We already have – as we did during both Nice referenda and all EU treaties before that.
Martin is concerned that Sinn Féin’s opposition to the Lisbon Treaty is somehow similar to that of the British Conservative Party. It would be a mistake for Sinn Féin to decide our position on an issue as important as this on the basis of what other parties do. Rather we should analyse the Treaty on the basis of our republican socialist principles and respond accordingly. On the basis of Martin’s logic, we would be unable to take any position as European right-wing parties other than the British Tories (such as Silvio Berlusconi’s Forza Italia) support the Treaty!
Martin argues that the prospect of a referendum on the Lisbon Treaty could have profound constitutional implications for Britain, particularly if the Welsh and Scottish vote ‘Yes’ and the English vote ‘No’. This may be the case as the people of Scotland now have the right to vote in a referendum on independence but the break-up of Britain will only come about if a majority of voters in that state support such a move. While the outcome of the EU Treaty referendum might assist this process, it will not, in and of itself, be the deciding factor.
Martin suggests that the opt-out secured by the British Government on the Charter of Fundamental Rights has somehow “gutted the social legislation within the Treaty”. This is simply not true.
The Treaty adds no new rights to those already available to citizens of member states, either through their national laws or those covered by the European Convention of Human Rights. If anything, the Charter of Fundamental Rights will simply serve to strengthen the European Court of Justice as against national courts and the European Court of Human Rights. This will have the effect of eroding both democracy and human rights.
Martin is technically correct when he argues that the Lisbon Treaty as presented to the 26-County electorate will be different to that which would be presented to people in the Six Counties if there was a referendum there on the basis of different opt-outs secured by the Irish and British governments. However, none of these opt-outs significantly change the substance of the Treaty or the impact it would have in either jurisdiction. It is also highly likely that both governments would opt in at a later stage as their opt-outs are primarily cosmetic and aimed at winning public opinion.


Martin is absolutely right when he states that the British Labour Party wants the economics of Boston. Unfortunately, this is also where EU economic policy is heading. Since the signing of the Lisbon Strategy, in 2002, and particularly with its mid-term re-launch in 2005, the focus of EU macro economic policy has been about extending the single market to services, including eventually health, education and audio-visual services. In plain English, this means more privatisation, deregulation and reductions in public services in a bid to make the EU the world’s most ‘competitive’ economy.
While European social democrats defend this policy platform on the basis of the need for growth in order to fund a reformed ‘Social Europe’, in reality it signals the end of Social Europe and the entrenchment of neo-liberal economics at the heart of European economic policy.
It is unfortunate that Martin talks about ‘bad Europeans’, as if saying ‘Yes’ to EU treaties makes you a ‘good European’. Member states should be free to make their own democratic decisions on treaties and other member states should respect those decisions. Attempting to demonise those whose view does not coincide with the dominant position in Brussels is deeply undemocratic.
Martin’s principal point is that Sinn Féin should alter our current position of “critical engagement” to “critical support” on the basis that EU legislation is “progressive”. Not only does he fail to list any of this “progressive” legislation but he ignores the four key grounds upon which our current policy rests:-
1)     Sinn Féin believes in an inter-governmental approach to the EU, not a federal one. The Lisbon Treaty further centralises power in the hands of EU institutions, deepening the democratic deficit and undermining local and national democracy.
2)     Sinn Féin believes in positive neutrality, UN reform, conflict resolution and demilitarisation. The Lisbon Treaty wants to create a European defence/military capability and unified foreign policy subservient to NATO, the combined effect of which will be greater global instability and insecurity.
3)     Sinn Féin believes in good quality public services and economic and fiscal policies that are aimed at eliminating poverty and inequality. The Lisbon Treaty will accelerate the right-wing trend already evident in the EU, undermining public services and limiting national governments’ abilities to respond to the needs of the most marginalised in society.
4)     Sinn Féin wants Ireland and the EU to play a positive role in tackling the world’s most pressing global problems: poverty, war, disease and climate change. The Lisbon Treaty not only ignores these issues but it advances economic, trade and foreign policy agendas that will make these problems significantly worse.
My challenge to Martin and to all those who support the Lisbon Treaty is to explain on what basis they believe the present direction of the EU, as outlined in the Lisbon Treaty, is ‘progressive’.  From where I stand, all of the evidence suggests the opposite, and on that basis I will be voting ‘No’.