Not one person in Executive would give the UDA tuppence - McGuinness 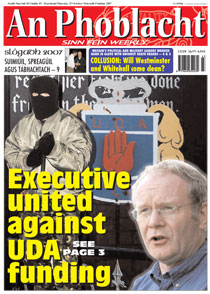 WHILE the News Letter trumpeted “A House Divided” this week, the Irish News conjured up its own version of the magic show where unionists and republicans ganged up on the SDLP over funding for the UDA even though, in Martin McGuinness’s words: “There is not one person in the Executive who would give the UDA tuppence.”
“Ritchie left high and dry by three governments and parties” announced the Irish News. Ritchie was reportedly under pressure from Dublin’s Department for Foreign Affairs, British Secretary of State Shaun Woodward and US Special Envoy Paula Dobriansky. A powerful image emerged with the SDLP minister as almost a Joan of Arc figure, alone and refusing to be deflected from her purpose.
But behind the image Ritchie was avoiding Sinn Féin’s questioning of circumstances the minister was proposing to fund the UDA. Was the party, which once courted the UDA vote to unseat Gerry Adams in West Belfast, engaging in gesture politics? Sinn Féin is opposed to all funding of the UDA, regardless of any decommissioning.
Emerging from an Executive meeting, Margaret Ritchie claimed there had been a debate about the funding of the UDA-linked Conflict Transformation Initiative (CTI) and she had been out-voted by the DUP and Sinn Féin.
But there was no vote. Martin McGuinness described himself as surprised and disappointed that the SDLP minister chose to come out of the meeting and portray the content of the meeting as something different from what actually happened.
“The fact is that there was absolutely no vote whatsoever on her statement in the Assembly,” McGuinness said. “There was no vote whatsoever on the CTI.”
Leaving the Executive meeting early to be interviewed on the BBC’s Hearts and Minds show, the SDLP minister claimed that official minutes of the last Cabinet meeting had been tampered with. It was all starting to sound like a conspiracy involving governments, ministers and now the civil service.
Deputy First Minister Martin McGuinness speaking during Question Time in the Assembly this Monday said that the issue that had been marked “more by fiction than fact”.
“Let me be absolutely clear. I – and I believe I also speak for everyone in the Executive – am totally and absolutely opposed to any funding whatsoever going to the UDA, whether they decommission their weapons or not”, McGuinness said.
“The funding introduced by (former British Secretary) Peter Hain was irregular. It was wrong and it should never have happened.
“The decision by the Minister for Social Development was, in my opinion, absolutely correct”, said the Deputy First Minister.