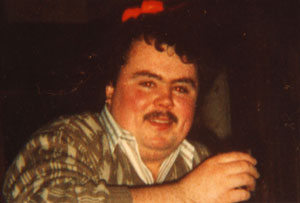 WHEN 30-year-old Eugene Martin was shot dead by the UVF, in February 1993, the people of Ballyronan, in south County Derry where he lived, were shocked by his killing.
A taxidermist, Martin was shot four times in the head at his workshop near Toomebridge, a village straddling the border of Counties Derry and Antrim and an area that suffered intense loyalist activity from the end of the 1980s and the early 1990s.
Eugene Martin’s killing was viewed as a random sectarian killing. He was not in any way politically active, yet those who gunned him down went to a lot of trouble to kill him.
They hijacked the car used for the attack in Belfast and were informed enough to know that customers going to his workshop knocked on a side window to gain entry.
The coroner, at his inquest in July 1994, described the killing as “brutal and senseless”.
In the media the killing of Eugene Martin was portrayed as ‘just another senseless, random sectarian killing’.
Yet according to many people living in the Loughshore area, that stretch of Lough Neagh coastline running through County Derry and into County Tyrone, Eugene Martin was killed because he knew something. What did Eugene Martin know?
At the time of his death it was reported that Eugene was targeted by loyalists because he overheard them planning a killing somewhere in the South Derry region.
An Phoblacht has been told by a number of people from the area that Eugene Martin stumbled across a meeting being held in a pub in a predominantly loyalist village in South Derry. Among those said to have attended the meeting was a well-known senior unionist politician from the mid-Ulster area and a member of the RUC Special Branch. Also, we were told, loyalist assassin Billy Wright and a number of his henchmen were in the room.
Eugene Martin’s killing was only one of many killings carried out by loyalists in the South Derry and East Tyrone area at that time, yet his killing was different.
Whereas Eugene Martin is believed to have been assassinated to ensure that evidence linking the Special Branch and unionist political figures to loyalist counter-gangs was not disclosed, most of the other killings at the time were clearly carried out to instil terror in isolated Catholic and nationalist communities.
Political assassination became the order of the day. The British Government had effectively given up on the so-called Anglo-Irish Agreement. Signed in 1985 by then British Tory prime minister, Margaret Thatcher, and her Dublin counterpart, Fine Gael’s Garret FitzGerald, the Anglo-Irish Agreement was to be the cornerstone of a political and military strategy they hoped would act as a bulwark against the every-increasing political strength of a vibrant Sinn Féin and the military effectiveness of the IRA.
So as the 1980s drew to a close, the British Government changed strategy and decided it could not stem the rising tide of support for Sinn Féin through using the Anglo-Irish Agreement, or the Hillsborough Accord, as it was dubbed by republicans.
The North’s nationalist voters abandoned the London- and Dublin-sponsored SDLP and opted to cast their votes for the republican party, backing Sinn Féin’s demand for a united Ireland.

MILITARY INTELLIGENCE, THE UDA AND THE UVF
What the British strategy turned on was the requirement to revitalise the UDA and UVF death squads that were a key component of the anti-republican counter-insurgency drive.
In the five years between January 1982 and December 1987, loyalist death squads – that had largely degenerated into mafia-type criminal gangs operating protection rackets and dealing drugs – had killed 71 people throughout the North.
In the six years from January 1988 and 1 September  1994, when the IRA declared its cessation of military operations and opened the door to the peace process, these same killer gangs slaughtered 229 people.
There were three central pillars supporting the British plans to revitalise the counter gangs:–
1)     The British Government establishing control over the loyalist killer gangs;
2)     Rearming them with an arsenal of high-powered weaponry;
3)     Channelling military, police and political intelligence to the gun gangs.
The Force Research Unit (FRU), a secret arm of British Military Intelligence, was tasked with running agents within the loyalist gangs and feeding these agents with information.
One such agent was Brian Nelson, a former British soldier who was jailed for seven years in 1974 for kidnapping and torturing a Catholic man, Gerard Higgins.
The UDA man worked as an intelligence officer after his release from prison and was recruited as an agent around 1983. After some years he ceased his activities and fled to Regensberg, Germany, where he lived until 1987 when he was persuaded by his British handlers to return to Belfast.
Nelson resumed his previous role as UDA intelligence officer, based in the Shankill Road, and he became a major figure in reorganising the UDA. He operated under the command of ‘Colonel J’, head of the FRU. ‘Colonel J’, a seasoned British Military Intelligence operative, was subsequently identified as Colonel Gordon Kerr.
After a stint as British military attaché to Beijing, in China, Kerr was posted to Iraq where his experience in running agents provocateurs will no doubt serve the British Army well.
The British strategy saw British Military Intelligence, through Nelson – who at this time was the UDA Director of Intelligence – importing a huge consignment of sophisticated weaponry into the Six Counties.
Brian Nelson travelled to apartheid South Africa (reportedly with clearance from officials from the British Ministry of Defence in Whitehall) and an unnamed British Government minister. There he set up the weapons deal with the racist regime’s arms manufacturer, Armscor (through its employee, Dick Wright) to bring arms to loyalists in the Six Counties.
The consignment was made up of 200 AK-47 assault rifles, 90 Browning pistols, 500 fragmentation grenades, up to 30,000 rounds of ammunition, and 12 RPG rocket launchers.
Wright is an uncle of Alan Wright, who was co-founder, with Ian Paisley and Peter Robinson of the DUP, of the quasi-military Ulster Resistance which was, ironically, set up to destroy the Anglo-Irish Agreement.
Another well-known DUP figure, William McCrea (now MP for South Antrim), also refused to let his avowed aversion to terrorism stop him sharing a platform with the notorious Loyalist Volunteer Force sectarian gangster leader, Billy Wright, in Portadown in September 1996 when Wright was under threat from the UVF because he was too bigoted an extremist even for them.

THE MURDER OF PHELIM McNALLY
As 1988 drew to a close, a loyalist gang attacked the home of Francie McNally, near Coagh in County Tyrone, and killed his brother, Phelim.
Francie McNally was a leading member of Sinn Féin and one of the party’s most senior councillors in Cookstown. He was certainly the target of the death squad. However, Francie survived the attack only to witness his younger brother die.
Speaking to An Phoblacht, Francie recalled how, on the night of Phelim’s killing, he was held by an RUC patrol after leaving the offices of Cookstown Council.
On three occasions, as he sat at the side of the road, different members of the patrol had ordered him out of the vehicle he was travelling in and asked him if he was going home.
Francie was agitated and annoyed with the persistent questioning but repeatedly answered that he was going home.
“I was half expecting something to happen,” said Francie. “The UDR had been searching around the fields that day and had only left about two hours before the attack.
“Phelim lived two miles away and he called in to see me after coming home from hospital, where he was visiting his wife who was in having a baby. He called in at 10 o’clock and at 20 minutes past 10 he was dead.”
The UDA Director of Intelligence, Brian Nelson, had the crown forces security files with Francie McNally’s details. It was these details that were used to target him. That his brother died instead was of little consequence to the death squad.
In fact, the death of Phelim McNally was part of the outworking of the new British Government strategy to smash the Republican Movement.
The killer gangs would target key activists, their homes and their families and friends.
Their intention was to poison the water that republican activists swam in to kill them off and kill the demands for a united Ireland and for justice and equality.
That the British Government waged war on the nationalist population of the North is not in doubt. That unionist politicians colluded in that war and became mouthpieces for loyalist killers is not in doubt either.
But the questions around the deaths of so many nationalists as consequences of this conspiracy remain to be answered.
Why did the RUC ignore some of the key witnesses to the killing of Bernard O’Hagan? The Sinn Féin councillor was killed in the grounds of Magherafelt by a loyalist hit-squad in September 1991. Adults who came forward were later ignored by the RUC.
Two teenage girls also came forward, saying they could recognise the shooter. They were driven to Donegall Pass RUC Barracks in separate cars. By the time they were to pick out suspects in an identity parade, the girls were too afraid to go through with it, according to sources close to the case.
Where did the intelligence and the guns used to kill Peter Gallagher, a Sinn Féin member from Toomebridge, come from?
Gallagher was shot dead in Belfast in March 1993 near the Village area of the city. His killing happened under the noses of two British Army watch-towers on Broadway and Divis Tower and Grosvenor Road RUC Barracks, all festooned with surveillance cameras, yet his killer cycled casually away along the Westlink.
When delivering his verdict on the death of Peter Gallagher, the coroner said the killer’s intention was “nothing higher than a sectarian motive”.
The truth is different Peter Gallagher was killed as part of a British Government strategy designed to break the will of the nationalist and republican people of the North.
It is the British role in collusion with unionist death squads run under the names of the UDA/UFF and UVF that must be investigated thoroughly and exposed. The British administration must be forced to come clean.