No rubber-stamp for Policing Board 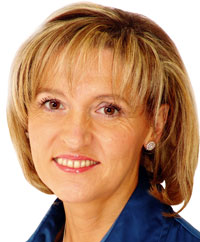 POLICING BOARD member and Sinn Féin party spokesperson on Human Rights and Equality Martina Anderson MLA has said that Sinn Féin will not rubber-stamp reports by the North’s Policing Board.
Speaking on Tuesday after the publication of the third Annual Human Rights Report, Anderson said:
“Sinn Féin has made it clear that our engagement with the policing structures is about delivering accountability and ensuring effective policing within a strong human rights framework. While recognising that there has been progress, we need to further consider these recommendations because we do not believe they are strong enough.
“Sinn Fein will not just rubber-stamp Policing Board reports. We will ensure full compliance with international and European human rights standards. Any attempt to dilute or sidestep these standards will be challenged. We want full discussion with all of the relevant organisations, including those from the children’s rights sector and the PSNI to ensure full compliance with human rights standards.”
Martina Anderson said that Sinn Féin does not support or endorse a number of the recommendations and the party has urged the Policing Board, in partnership with other key human rights experts and the PSNI, to actively consider these recommendations over the next three months.
“We have a number of specific concerns. We will not, under any circumstances, endorse the use of plastic bullets, particularly against children, and believe it is wrong that the Policing Board has again supported the use of plastic bullets.
“There are a number of other issues identified in the report that require much stronger recommendation to ensure progress, these include:-