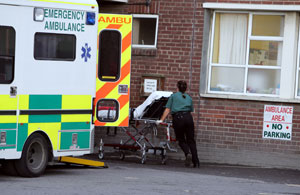 BREAKING a pre-election promise guaranteeing its future, the Irish Government now plans to close Clare’s sole hospital casualty unit in Ennis, County Clare.
“Replacing in-patient A&E with an out-patient nursing station is a lethal formula, “ said Peadar McNamara, chair of the Hospital Development Committee. “In Clare alone, this ‘cost-cutter’ will result in the needless deaths of 20 people every year.”
So what does it mean when your local hospital closes its doors for emergencies?
Peadar McNamara explains.
“Imagine your four-year-old son has an asthmatic attack at 10 o’clock on a Saturday night and you live in West Clare, in Loop Head. You can’t get a doctor; Shannondoc is already out on a call; and the ambulance has just left for Limerick, so the ambulance won’t be back for four hours. In four hours, it will be too late.
“You set out on the 80-mile journey to Limerick, your child gasping for breath as you drive like hell over those narrow, twisting roads. You pass what used to be Ennis Hospital - the sign says: ‘CLOSED FOR EMERGENCIES’.”
Ennis is not the only town that stands to lose its in-patient services,
Peadar McNamara points out.
“The Government plans to terminate all in-patient services in up to 23 towns across Ireland. The bed stripping planned for Ennis and Monaghan is just the beginning.”
People do not understand what ‘centralising’ these hospital services really means, the hospital development committee chair continued.
“All hospital night beds are to close and all in-patient services axed.
Instead of A&E, all we will have is a nurse, 8 to 8, Monday to Friday, just for minor injuries.”
Patients who live further away from hospital casualty units die more often international experience shows. Research done in Montreal, for example, shows that children under five, especially babies, die more in the absence of a local hospital A&E unit. People suffering from asthma, from diabetes and road traffic accident victims are particularly at risk.
Ennis General Hospital sees 21,000 patients year in, year out.
“These patients will now be re-routed to the regional hospital in Limerick, which is already bursting at the seams,” Peadar McNamara said. “Yet the plan is for Limerick to gobble up the smaller hospitals in the region, such as Nenagh General.
“Medical empires are being built at the expense of local communities. People will pay for these empires with their lives.”
The Minister for Health, Mary Harney, has confirmed that a formal announcement terminating the present hospital service at Ennis General will be made in December or January.