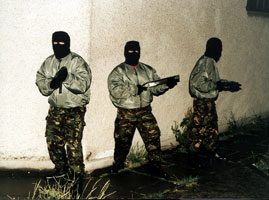 PSNI refuse to give information on threat to Minister

UDA feud
Meanwhile there are fears that the latest eruption of feuding within unionist paramilitary group, the UDA will spread beyond its latest focal point of Carrickfergus in County Antrim.
The feud between the UDA’s South east Antrim faction and the rest of the loyalist organisation saw two houses in Carrickfergus targeted in gun and pipe-bomb attacks last weekend.
Gangs of UDA paramilitaries also massed in the nearby town Larne last weekend weekend and staged ‘shows of strength’ at two local pubs.
The breakaway UDA faction is in South East Antrim is accusing the UDA leadership of organising the event in an effort to stir up trouble.
George Robinson, who is vice-chair of the UDA splinter group Beyond Conflict in Larne, claimed the group was trying to move from paramilitary activity to helping the community.