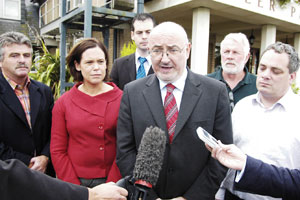 SPEAKING ahead of the resumption of the Dáil after its summer recess on Wednesday, Sinn Féin Dáil leader Caoimhghín Ó Caoláin noted that the day also marked one year exactly since the Taoiseach’s infamous interview with Brian Dobson and that despite being questioned before the Tribunal for three and a half days he still has not adequately answered serious questions regarding his personal finances.
Deputy Ó Caoláin said:
“There has clearly been a lack of prudence in the Taoiseach’s decision making and he needs to accept that the vast majority of people believe that there is a credibility gap.
“Mr Ahern has not sufficiently answered questions in relation to receiving money from business friends in Dublin in 1993, from business people in Manchester in 1994 and a briefcase of money from a Manchester based businessman later that year.
“The seriousness of what is at stake has nearly been lost in the minutiae of foreign exchange transactions and the soap opera style coverage of some of the media. The fact is that the focus of government is being taken away from serious issues. Instead of doing their jobs, minister after minister is coming out to defend the Taoiseach.
“I have never seen a government as badly prepared for the return of the Dáil as this one. This is deeply worrying given the serious challenges facing the economy and our public services.
“If one takes the example of healthcare services, Fianna Fáil-led governments have presided over a catalogue of failures and delays particularly in cancer care, including:
•    Failure to fully roll out the long-promised Breastcheck service with many women now having to wait until 2009 to get their first appointment.
•    Failure to deliver the long-promised radiation oncology centres in Dublin, Cork, Galway, Waterford and Limerick. Delivery has been delayed because of the Government’s initial insistence on providing these services through public-private partnerships which it then found would take too long.
•    Failure to plan radiation oncology services for other regions, leading to totally inadequate provision in the northern half of the island. This is compounded by the failure to ensure full cross-border co-operation in cancer services.

“The Taoiseach’s credibility has been severely damaged by the Mahon Tribunal. However it is my view that both he should resign not because of his personal finance fiasco but rather because of his abject failure to deliver a first class health service. Mary Harney should also stand down as Minister for Health as she too has failed to deliver.”

Campaigns
Ó Caoláin said the party’s TDs and senator will be leading out a major plan for party development across the 26 Counties, including key campaigns around health, the economy, regional development and community safety.
“The party will also be making preparations for the forthcoming EU Reform Treaty referendum and a nationwide recruitment drive,” Ó Caoláin said.
Speaking of the work carried out at last week’s Oireachtas planning meeting in Howth, County Dublin, ahead of this week’s Dáil resumption, Ó Caoláin said:
“We have discussed ongoing work to build alliances both inside and outside Leinster House and continued all-Ireland co-operation at government level. The party’s Oireachtas work will be central to this project with a major reshuffle of portfolios reflecting Sinn Féin’s renewed political priorities. Delivery of first-class public services backed by a sustainable economy will be top of the party’s agenda.
“We intend to hold this government to account every day of the week, putting forward real alternatives.
“Our sights are now also firmly set on the 2009 local elections.
“We will continue working with our ministers in the Assembly to progress the delivery of equitable all-island economic, environmental and rural policy making and cross-border work. Irish unity is central to this strategy.”