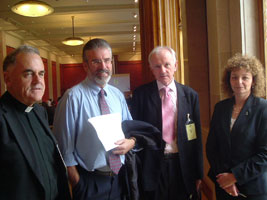 OVER a million people die as a result of suicide worldwide every year. Suicide is now the third largest killer, trailing only behind cancer and heart disease. One person dies as a result of suicide every 40 seconds. The suicide rate on the island of Ireland has increased by 25 per cent within the last ten years. According to official records, in 2005, 645 people took their own lives. In the following year, the figures rose to almost 800 lost lives.
The number of recorded deaths by suicide on the island currently outstrips the number of road traffic deaths. Figures for the 26 Counties show that around 11,000 people a year present themselves to Accident and Emergency as in danger of suicide or self-harm. It is estimated that for every person who seeks help, eight more people at risk do not. No wonder the current rate of suicide in Ireland has been described as an epidemic. Death by suicide may have reached epidemic proportions but it is made unique by one significant factor: it is wholly preventable.
And in saying that I don’t mean everyone contemplating taking their own lives can or will be saved but that the forces behind the compulsion are mostly within the realm of human capacity and that renders our ability to address this tragedy all the more powerful.
It is against this understanding that we must judge our failures to develop meaningful strategies, build an appropriate infrastructure and provide sufficient funding. It is against this understanding that we must place the experience of families desperate to access treatment and care for a vulnerable loved one.
And it is against all this that we must support the dedicated work of all those agencies and individuals working towards suicide prevention. And in the Long Gallery at Stormont this week, the conference hall was packed with just such groups and individuals.

DIFFERENCES
“In June 2005, Sinn Féin held an event in this room about suicide prevention. Before that, we lobbied the British Government to develop a suicide prevention strategy,” Sinn Féin’s Gerry Adams said. “Our message today, as it was then, is the same: suicide is a major crisis but it is a preventable crisis.”
There are a number of important differences between then and now. Most importantly, we now have local ministers accountable to local people. Two years ago, there was no strategy for suicide prevention in the Six Counties.
“Now, because of the efforts of many people in this room, there is a strategy which is one year old this month. And, most importantly, because of the efforts of many in this room, there are people alive today who would otherwise have been lost through suicide,” said Adams.
As an MLA for West Belfast, the issue of suicide has particular significance for Gerry Adams. The rates of suicide, attempted suicide and self-harm in West and North Belfast are higher than the average. According to official statistics, one in every five people who visit their GP has psychiatric health needs. In West and North Belfast this figure has risen to one in three.
Adams highlighted a number of recent cases where the failure of the system to offer proper protection and support resulted in death by suicide.
Roseanne Irvine, from Turf Lodge, died by suicide in Magheraberry Jail. Her inquest and excellent research by the Human Rights Commission graphically revealed how the system had failed her and others, said Adams.
Adams said:
“Young people who come forward seeking help struggle to find their way through the labyrinth of the health system. Young Danny McCartan, whose parents are here today, was passed from pillar to post through the case files of four different health agencies before taking his own life.”
Adams described the policy document for the Six Counties, Protect Life - A Shared Vision (Suicide Prevention Strategy and Action Plan, 2006-2011), as an important first step but the key now is delivery, he said. Existing strategies, north and south, should be integrated and targets for suicide reduction set as an accelerant for change.
Last week, the Assembly mandated the Health Committee to conduct an inquiry into suicide and report back to the Executive and Assembly by February. This offers an opportunity to push suicide prevention to the top of the Executive’s policy agenda and presents an opportunity to further build an alliance against suicide on this island, said Adams.
The president of the Irish Association of Suicidology, Fine Gael TD Dan Neville, outlined some of the factors that increase the risk of suicide, including poverty, disintegration within community and family breakdown.
The most alarming statistic revealed alcohol and drug abuse as a significant factor. The abuse of alcohol and drugs was linked to 20 times greater risk of suicide above the average. Ninety-three per cent of men who die by suicide have significant levels of alcohol in their system at the time of death.
Addressing the conference, Education Minister and Sinn Féin MLA Catriona Ruane discussed the role of bullying and the importance of anti-bullying policies within schools. According to recent figures, 43 per cent of primary and 29 per cent of post-primary pupils reported experiencing bullying at least once.

ALL-IRELAND APPROACH
An all-Ireland approach to suicide prevention makes sense, said Colm Donaghy of the North’s Suicide Prevention Strategy Implementation Body. He pointed out that while many of the factors implicated in suicide are known, the efficacy of measures taken to prevent suicide is largely unknown.
Philip McTaggart, from PIPS, a suicide and self-harm prevention and support group, described how the loss of his own son, also named Philip, at the age of 17 through suicide had promoted him to establish a support group in North Belfast. Siobhán Boyle described her experience of suicide prevention in West Belfast.
Lawrence Morley, from Newry and South Armagh, highlighted the difficulties of suicide prevention in rural areas and the crisis of identity amongst young men that often leads them to take their own lives. Morley pointed out that measures adopted in Australia have reduced the rate of suicide by 25 per cent.
Maureen Bolger, from Dublin, gave a heart-rending account of her 16-year-old son Darren’s death by suicide and the subsequent establishment of Teenline Ireland. A helpline for young adults, too old to phone Childline and too young for the Samaritans, is needed she said.
Sinn Féin TD Caoimhghín Ó Caoláin described the complication of three governments - North, South and British - in developing an integrated approach to suicide prevention on the island of Ireland. Ireland needs a joint north/south approach with specific targets, for example a reduction in the suicide rate of 20 per cent within ten years. Whatever the target and whenever the date, we need action, not aspiration, said Ó Caoláin.
Health Minister and UUP MLA Michael McGimpsey said suicide was now widely recognised as the third largest cause of death. Rates of mental ill health in the North are 25 per cent higher than the average in England. Clearly, improving mental health care would be a significant factor in reducing the risk of suicide, said McGimpsey.
Other factors, such as the impact of the internet and under-age drinking, were also highlighted by the minister. McGimpsey had already raised the impact of some chat rooms and internet sites in relation to suicide with key internet service providers. As for under-age drinking, the minister warned that retailers caught repeatedly selling drink to under-age users would have their licences revoked.