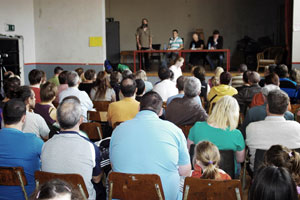 The Wheelock family held a public meeting at Our Lady of Lourdes Church on Seán MacDermott Street, Dublin on Saturday 15 September

THE FAMILY of Terence Wheelock, a young Dublin man who died in Garda custody, will go to the High Court in Dublin if 26-County Justice Minister Brian Lenihan does not grant an independent inquiry into his death.
Wheelock (20), of Summerhill in Dublin’s north inner city, died at the Mater Hospital in June 2005 after he was found hanging in a cell at Store Street Garda Station three months previously. He was in a coma by the time he reached the hospital. A divided jury at an inquest into Wheelock’s death in July this year recorded a verdict of death by suicide.
Terence Wheelock’s family dispute Garda claims made in court that he tried to hang himself with a cord from his tracksuit bottoms. The family is adamant that he was mistreated while in Garda custody.
The Wheelock family held a public meeting at Our Lady of Lourdes Church on Seán MacDermott Street on Saturday, 15 September. Larry Wheelock described his family’s wish to “find out exactly what happened to Terence behind closed doors”.
Meanwhile, Sinn Féin Justice spokesperson Aengus Ó Snodaigh TD has called for a radical overhaul of the regulations governing the treatment of people in Garda custody.
Ó Snodaigh was speaking this week after Garda management circulated a memo to officers reminding them that ill-treatment of people in Garda custody should not be tolerated. This decision was taken on foot of a recommendation in a report from the European Committee for the Prevention of Torture which will be published shortly.
Ó Snodaigh said:
“A memo is better than nothing but we need a far more robust response if the abuse by Gardaí of people in their custody is to be stamped out.
“The regulations governing the treatment of persons in Garda custody have been in place since 1987 and have remained substantially unchanged since then. This means that the regulations predate the events in Donegal uncovered by the Morris Tribunal. It means the regulations predate the deaths of Terence Wheelock and Brian Rossiter who both died following Garda custody. It means the regulations are dangerously ineffective. Indeed, they have been proven ineffective by the many grave abuses which have taken place since 1987, including the framing of Dean Lyons through a forced confession.
“Those regulations must be human-rights proofed and brought into line with best international standards. Ideally, safeguards to protect people in Garda custody should be provided for through primary legislation.
“The Irish Government is currently formulating its response to the report from the Committee for the Prevention of Torture and it is my firm hope that it will include a commitment to review and radically overhaul the Regulations Governing the Treatment of Persons in Garda Custody.”