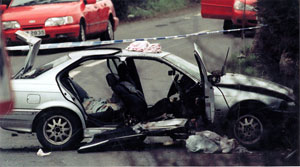 The Committee on the Administration of Justice (CAJ) met on Wednesday with the Police Ombudsman to receive a copy of her report into a complaint made by the organisation about RUC handling of threats against Rosemary Nelson in the lead-up to her murder in 1999.  The report confirms CAJ’s contention that RUC failed Rosemary Nelson.
CAJ’s Director, Maggie Beirne, said:
“Rosemary Nelson was a committed and highly professional lawyer who acted for clients from all sections of the community.  Precisely because of this commitment and her effectiveness as a lawyer, she became a target for threats from a variety of sources.  The Ombudsman has confirmed that those threats were not treated with the gravity and urgency required.”
“Amongst the documents supplied to the police in advance of Rosemary’s murder was material that, in our view, later proved of direct relevance to the murder inquiry.  If this information had been properly investigated, it may have lead the police to the individuals responsible for her murder.  These are issues which we hope will be fully, thoroughly and publicly explored by the Rosemary Nelson Inquiry”, she said.