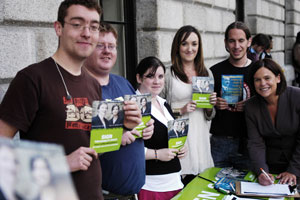 Sinn FÉIN Chairperson and Dublin MEP Mary Lou McDonald launched the party’s signature drive in support of the European ‘1Million4Disability Campaign’ in Dublin at the GPO on Saturday, 15 September, where she joined party activists collecting signatures.
Mary Lou said:
“The 1Million4Disability Campaign was launched in January by the European Disability Forum (EDF) with the objective of collecting one million signatures for presentation to the European Commission and President of the European Parliament on 4 October.
“The campaign is about getting the EU to introduce effective legislation to combat all forms of discrimination and guarantee full inclusion of the more than 50 million people in the EU who live with disabilities.
“As the deadline is approaching and Ireland is short by 4,000 signatures, I agreed with the campaign that Sinn FÉIN would assist by organising a country-wide signature collection drive.
“This campaign is very important for Ireland. Since the introduction of the Disability Act 2005, discrimination against people with disabilities in terms of access to services has actually increased by 16 per cent.
“This year’s Equality Tribunal annual report revealed that 23 per cent of the total case files opened during the previous year were by those with disabilities experiencing discrimination in the workplace or accessing services.
“The authority’s chief executive said at the launch of the report that the barriers faced by people with disabilities are so prevalent that many thousands are left effectively ‘housebound’. This is a shameful indictment of the government.
“A measure of any society is how it looks after the needs of its most vulnerable.  Successive Fianna Fáil-led governments have ignored the rights of people with disabilities. Sinn FÉIN continues to fight for an Ireland of Equals and I am delighted as an MEP for Dublin to be promoting our progressive policies in Europe and at home in such a practical way.”
Mary Lou McDonald said that Sinn FÉIN members in every county in Ireland will be asking people to sign the petition, hoping that Ireland can far exceed its quota and help reach the one million signatures needed.
• Petition can be signed online @ www.1million4disability.eu