All Ireland agenda Fianna Fáil may organise in the North 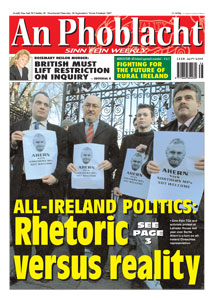 It is easy to be cynical about the announcement by Fianna Fáil at their Wicklow think-in that they are going to develop a strategy for organising the party on a 32-County basis. Even if it goes no further than this they will see political advantage in the headlines and will hope that it compounds the damage they believe they have done to Sinn Féin in the general election. But at a deeper level the move shows the success of the peace process spearheaded by Sinn Féin as other parties feel the need to address the All-Ireland agenda.
Announcing the start of a Fianna Fáil discussion process on organising in the Six Counties, Bertie Ahern said it should not be pre-supposed that they will contest elections. That, of course, will be the real test as the organisation of Fianna Fáil in the North, without taking part in elections, would be merely a token effort.
The Fianna Fáil move raises interesting questions for the SDLP. Until Sinn Féin overtook them electorally, the SDLP received cross-border support from Fianna Fáil, Labour and Fine Gael. These parties were most anxious to see the SDLP meet the Sinn Féin challenge because they knew that the republican party was growing in the 26 Counties also. Now they see the SDLP as a spent force. But is Fianna Fáil ready to merge with or step into the shoes of the SDLP? Do they believe that as an All-Ireland party they would win back from Sinn Féin many of the voters who formerly voted SDLP?
Irish Times political correspondent Stephen Collins, picking up on a cocky mood of wishful thinking at the Fianna Fáil event this week, wrote that Fianna Fáil “believes it has crushed Sinn Féin in the Republic and there is now a view in the party...that it can mop up the SDLP and give Sinn Féin a run for its money in the North”.
The Fianna Fáil move could be viewed less critically if Ahern had actually delivered on some key All-Ireland commitments arising out of the Good Friday Agreement, which he has failed to do so far. Principal among these is his failure to provide representation in the Oireachtas for citizens in the Six Counties. He has batted this ball around Leinster House for nine years now and has done nothing. At one stage he tentatively proposed allowing MPs from the Six Counties to participate in certain debates of the Dáil sitting ‘in committee of the whole House’. This would see MPs present in the Dáil chamber for debates arising out of the peace process and the All-Ireland agenda. However, as soon as Fine Gael and the PDs objected Ahern dropped the idea. There was no evidence that he had done any groundwork to persuade the naysayers in the Dáil. But of course he was able to claim credit for ‘making the effort’.
And then, after the General Election, far from using his 11 Seanad nominations to provide Six-County representation, Ahern appointed arch-partitionist and anti-republican Eoghan Harris as a Senator.
Sinn Féin TD Martin Ferris called on the Taoiseach to honour his commitment to all-island representation in the Oireachtas. Ferris stated:
“Oireachtas representation for Six-County citizens was committed to by the Taoiseach when his Government signed the Good Friday Agreement nearly ten years ago.
“Irish citizens should not be denied their constitutional right to participate fully in the life of the Nation just because they were abandoned behind an artificial border imposed by a foreign power.
“If the intentions of the Fianna Fáil party to organise and seek a political mandate on a 32-county basis are genuine now is an opportune time for him to deliver on his government’s commitment to all island representation in the Oireachtas.”
Sinn Féin MLA for South Antrim Mitchel McLaughlin said that now that Ahern had “finally embraced the concept of all-Ireland politics” it would be the opportune time for him to now deliver on his commitment all-island representation in the Oireachtas.
“If Bertie Ahern follows through on his intention to organise on an all-Ireland basis, how could he justify it to his supporters if those in the 26 Counties were to be given full national rights while those in the Six Counties were not?”, McLaughlin said.