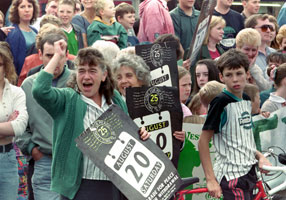 “Recognising the potential of the current situation and in order to enhance the democratic process and underlying our definitive commitment to its success, the leadership of the IRA have decided that as of midnight, August 31, there will be a complete cessation of military operations. All our units have been instructed accordingly.”
Thus, the IRA began its announcement of the historic 1994 cessation of military operations. In a move that wrong footed the British Tory Government, the IRA presented an opportunity for peace, for which it was clearly unprepared or not want.
John Major’s Conservative Government opted to play a dangerous and irresponsible game of semantics, insisting that the absence of the word “permanent” from the IRA statement rendered it worthless.
DUP leader Ian Paisley was reduced to a bizarre prediction of civil war and opponents of the republicanism in the media both in Ireland and in England reacted with hysteria, many openly and unashamedly hostile to the very idea of a peace process in Ireland. The response of unionist paramilitary group, the UVF, was sectarian murder, kidnapping and killing, Sean McDermot, a 37-year-old Catholic.
McDermott was abducted from the house where he was lodging in Antrim. A gang broke in the door with sledgehammers, dragged him from his bed, and bound him with tape before taking him away. He was later found dead in a car off Old Ballynoe Road, shot twice in the head with a shotgun.
In the 26 Counties Taoiseach, Albert Reynolds was one of the few establishment figures that didn’t seek to squander this historic announcement, welcoming the development as a step forwards.
Belfast’s Falls Road witnessed spontaneous cavalcades with nationalists waving Tricolours. But the joy and goodwill masked some understandable uneasiness among republicans, an uneasiness that was reinforced by the lack of reciprocation. But the vast majority of republicans put their trust in the republican leadership and their stewardship of the struggle at this crucial time.
After 25 years of armed struggle the IRA had taken a huge risk by declaring a unilateral cessation of military operations to aid the building of a genuine peace process and the search for an end to armed conflict. It marked a decisive step in the peace process. In the subsequent period, Irish republicans were the driving force in the effort to build and sustain a peace process, keeping the hope for peace alive, as others sought to abandon or sabotage the process,  preferring the certainties and divisions of war than taking risks for peace.
As it was, the IRA cessation collapsed after 527 days in February 1996 following a protracted period of British Government bad faith. Major’s Conservative Government had thrown away an unprecedented opportunity to resolve the conflict.
The IRA made its historic announcement of a cessation of military operations on 31 August, 13 years ago this week.