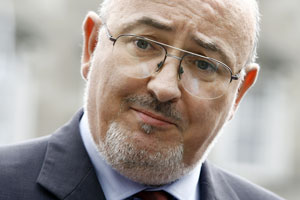 Responding to Pat Rabbitte’s resignation as leader of the Labour Party last week, Sinn Féin Dáil Leader Caoimhghín Ó Caoláin TD wished Rabbitte well in his continued role as a member of the Dáil and said he hopes to have a good working relationship with whomever succeeds him as Labour Leader collectively offering a truly left opposition to the current Fianna Fáil/Green Party/PD coalition.
“Though we have our political differences and have had an occasional spat on the floor of the Dáil chamber, I would like to wish Pat Rabbitte well in his continuing role as an elected member of the Dáil”, Ó Caoláin said.
“While we will continue to have those differences we also share similar views, particularly on socio-economic issues, and our respective parties have supported each other when pressing those issues in the Dáil.
“I hope to work well with whomever succeeds Pat as leader of the Labour Party and hope that a good working relationship between the Labour Party and Sinn Féin will help ensure that we present a truly left opposition to the current Fianna Fáil/Green Party/PD coalition.”
An Phoblacht
44 Parnell Sq.
Dublin 1
Ireland