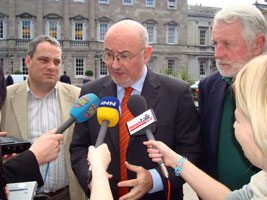 Following a meeting in Leinster House on Wednesday, Sinn Féin Dáil leader Caoimhghín Ó Caoláin has criticised government inaction since Aer Lingus announced its decision to withdraw the airline’s Shannon to Heathrow route, and has urged the Taoiseach to use today’s cabinet meeting to agree a change in approach to the impending crisis for the mid western region.
Also on Wednesday, Sinn Féin TD Aengus Ó Snodaigh TD and one of the party’s Dublin City Councillors, Daithí Doolan met with the trade union IMPACT to discuss the dispute around the attempt by Aer Lingus to introduce different pay structures for staff based at its new hub in Belfast.
Party Chairperson and Dublin MEP Mary Lou McDonald, Martin Ferris TD and Sinn Féin Limerick East representative Maurice Quinlivan will tomorrow meet with the Shannon Action group at 2pm.
“Sinn Féin was vehemently against the privatisation of Air Lingus as we believed it would, undermine the delivery of a regionally balanced service, company workers terms and conditions would be denigrated and the future of the airline operating from anywhere on the island could be put in jeopardy. Sadly the first two predictions have come to pass”, Ó Caoláin said.
“We forewarned that if Aer Lingus became a privately owned airline its board of management and investors would have no interest in the economic or social needs of the Irish people. As acknowledged in Fianna Fáil’s own internal briefing document entitled Key Facts on the Shannon/Heathrow Issue government concern has been directed simply to shareholders and not the economic stability of the country.
“We also stated that as an island Aer Lingus has a vital infrastructural role for the country. We added that government should be developing all airports as part of an integrated all-Ireland transport policy instead of selling off its assets.
“Sinn Féin has already outlined the urgent need for an all-Ireland vision for Aer Lingus and the airport sector. This is economic common sense. According to Intertrade Ireland figures, total cross-border trade increased between 2004 and 2006 by 17.7% to a total of €1.98 billion.
“Sinn Féin proposes the amalgamation of Development Agencies North and South working in conjunction with Intertrade Ireland in order to achieve maximum regional development for the island.
“Inward investment, tourism and indigenous business in the mid western region dependent on access to markets provided by the Shannon Heathrow route are under very real threat.
“Sinn Féin delegations will be meeting with the trade union IMPACT this afternoon and the Shannon Action Group tomorrow. We will listen to the concerns of both organisations and offer our active support in retaining the Shannon route and rejecting the proposed differential pay and working conditions Aer Lingus management are seeking to implement.
“I have today written to the Taoiseach asking him to use the coming weeks to bring together key stakeholders tasking them with providing a framework by which the Shannon Heathrow route can be retained whilst proceeding with the development of a Belfast Heathrow slot. Constructive dialogue can deliver an all-island solution to the current impasse”, he said.