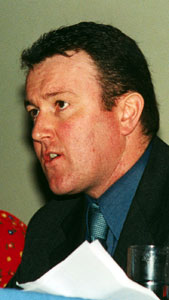 Newry and Armagh MP Conor Murphy led a group of representatives from the Crossmaglen community at a meeting with senior PSNI Officers on Friday, 24 August. The group also involved Sinn Féin Councillor Terry Hearty as well as local community and business representatives from Crossmaglen.
The meeting described by the MP as a critical engagement followed the most recent Public meeting in Crossmaglen at which the Newry/Armagh MP was requested to facilitate upfront, a meeting between community representatives and the PSNI. The decision to request the meeting was taken after the Sinn Féin MP give those in attendance a detailed feedback on his recent discussions with senior PSNI Officers, where concerns were raised about responses in tackling anti-social violence and criminality in the Crossmaglen area.
Speaking before last week’s historic meeting Conor Murphy said:
“The Community having been confronted with serious incidents of anti-social violence and criminality firmly believes that the PSNI response to tackling what is happening has, at best, been totally inadequate. At their request I agreed to facilitate a critical engagement between Community representatives and the PSNI, so that the community can put their views to them very strongly, and also hear from them, as to how they intend to effectively tackle the issues involved.
“Sinn Féin’s focus in all of our engagements with the PSNI – indeed with all of the policing structures – will be to ensure that it carries out its duties and responsibilities in a fair and impartial way, as an effective civic police service, which is democratically accountable to the public.”
An Phoblacht
44 Parnell Sq.
Dublin 1
Ireland