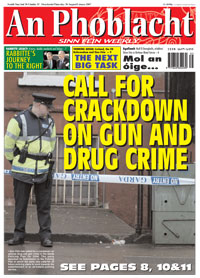 Call for crackdown on serious drug and gun crime

Deployment and Resourcing Priorities:
•    Sinn Féin’s key priority for 2008 is to see more Gardaí on foot and on bicycles patrolling anti-social behaviour hotspots and residential areas with greater frequency and particularly during the hours when problematic and criminal behaviour occurs. And interacting positively with the community as they do so.
•    A major process of civilianisation of appropriate administrative tasks and of the Garda traffic corps would free-up fully trained Gardaí to be redeployed into much needed patrolling duties and ultimately to fight crime. It is essential that the Policing Plan 2008 progresses this process of civilianisation.
•    The Policing Plan 2008 should include a commitment on the part of the Gardaí to comprehensively review and determine Divisional and District resourcing priorities, including the manner of deployment and shift arrangements. This should be done in partnership with communities through the Joint Policing Committees and community policing fora.
•    The plan must reflect the public demand for more full time Gardaí on the beat in communities rather than the voluntary, under-trained reservists.
•    More Garda Youth Liaison Officers.

Human Rights and Public Service Ethos
•    Sinn Féin is recommending an equal partnership approach between Gardaí and the community. This means that Gardaí should participate in the community and respond to the needs of that community. This also means that the community should participate in policing and support the police. Together they can solve problems more effectively.
•    The Gardaí should continue to work with the Ombudsman Commission, the HRC, the ICCL and others to develop full human rights compliance in their policies and practices.
•    The draft Policing Plan 2008 should be given to the HRC for human rights proofing.  And Divisional Policing Plans 2008 should be developed in full partnership with Joint Policing Committees and community policing fora.

Serious Drug and Gun Crime
•    Activities focused on disrupting illegal drugs supply chains and on eliminating the proceeds of drug-related crime.
•    The continued and increased pursuit of major drug traffickers and lower level dealers in addition. We need a more aggressive pursuit of major drug traffickers by the state, ensuring that the bigger players are caught, tried and receive appropriate and consistent sentences.
•    The resources available to Garda Drug Units should be at least doubled and at all times they should strive to operate at full capacity (in the recent past positions in the drug units have been left vacant). Community input should be sought via JPCs and community policing fora, where these exist, into the use of these resources.
•    Special Branch should be disbanded and its officers redeployed only following completion of intensive human rights upskilling. For decades this “force within a force” has dominated both the ethos and the management structure of the Gardaí. Using the draconian Offences Against the State Acts, it has violated civil rights and diverted much policing time and resources away from real service to the community. It should be disbanded as part of an overall reorganisation of Garda structures taking into account, in particular, the need to tackle organised drug and gun crime.
•    Increase Garda profile in areas experiencing chronic problems of public drug dealing through higher frequency of targeted patrols on foot and bicycles in particular.
•    Seeking and co-operating with a state-wide roll out of the ‘Dial to Stop Drug Dealing’ campaign.

Anti Social Behaviour
•    A commitment to increase the rates of enforcement and prosecution of public order offences, drug and alcohol-related offences, joy riding/boy racing type offences, criminal vandalism, provisions relating to dangerous dogs and noise pollution.
•    A commitment to co-operate with and participate in community restorative justice initiatives, to train Gardaí in the principles and practice of CRJ and mediation and to ringfence part of the Garda budget for same.
•    A commitment to expand and further develop the Garda Juvenile Diversion Programme and Youth Diversion Projects.
•    A commitment to increase the number of Gardaí employed full-time on community policing. And to address the difficulties involved in filling such positions with the right candidates and reversing the high turnover in this post by changing Garda perceptions of the post and its status through, for example, alterations to the current norms governing promotions and career development in an Garda Síochána.
•    A commitment to act on the recommendations of Joint Policing Committees and community policing fora.

Domestic and Sexual Violence
•    An Garda Síochána must prioritise the prosecution of domestic violence crimes on indictment where possible rather than simply as breaches of orders.
•    A commitment to address the variation in Garda practice across the state and within stations. Existing Garda policy on domestic violence and practice must become subject to monitoring, support and supervision to ensure it at least achieves the level of response expected and set down by that policy.
•    Greater investment to be made in specialised training and ongoing in-service training for Gardaí given the distinct nature of crimes of domestic and sexual violence.
•    Establishment of an effective all-Ireland sex offenders register and arrangements for appropriate post-release supervision of sex offenders across the island.
•    Implement the sound recommendations in the Rape Crisis Network Ireland’s document The Investigation of Sexual Violence: Priority Recommendations published in April 2007.

Other Priorities
•    Establish an all-Ireland missing persons helpline and website that are adequately resourced, properly run and widely advertised.
•    Keep the Garda service routinely unarmed.  Review and improve the currently inadequate training delivered to Gardaí bearing weapons.
•    Arrange for an evaluation of the effectiveness of existing CCTV schemes in the community in terms of crime prevention, reduction, investigation and suitability for admission as evidence.  Roll-out CCTV throughout Garda stations.
•    Review existing approaches and develop new human rights compliant approaches to policing at demonstrations.
•    Increase resources and training to improve relations with ethnic minority communities including the Traveller community.
•    Increase resources to the Garda vetting service to cover all adults working with substantial access to children including the voluntary sector and to ensure that vetting is conducted in a timely manner.
•    The traffic corps should be civilianised but remain publicly accountable and under Garda supervision and no aspect of road safety enforcement should be privatised including the operation of speed cameras.