The Next Big Task 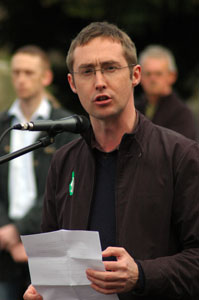 In the coming months, the 26 Counties will be one of the only EU member states to hold a referendum on the newly titled Reform Treaty. The importance of this vote for the EU, Ireland and Sinn Féin cannot be underestimated.
Most observers understand that the Reform Treaty is simply a repackaged EU Constitution designed to enable the governments of France and the Netherlands to ratify it without the inconvenience of referenda. The electorates of these two countries rejected the original text in 2005, creating a crisis at the heart of the EU federalist project. While the Constitution was due to be passed by referenda in up to 11 countries, the revised Reform Treaty may only be put to the democratic test in Ireland and Denmark.
The Treaty, like the Constitution, will shape the future development of the EU – and Ireland relationship to it  – for the coming decades. When European political leaders agree the final text in the autumn, a more detailed analysis will be required. At this stage, however, it is vital that Sinn Féin understands the strategic opportunity provided by the referendum campaign itself and responds accordingly.
Coming as it does midway between the 2007 general election and the 2009 local and European Parliamentary elections, it provides us with an enormous opportunity for re-energising the party and building our political strength. A strong and positive referendum campaign could act as a bridge between what has been a bad election this June and what must be a good election in two years time.
Ensuring this result requires us to see the referendum campaign as the next big task in our 26 County project, to allocate sufficient resources and to make it our campaigning priority in the coming months.
From the outset we need to understand and argue publicly that this referendum is winnable. While the first Nice Referendum campaign was as much lost by the Europhiles as it was won by the Eurocritics, this campaign is winnable even against the full weight of the political and media establishment.
The attitude of the Southern Irish electorate to the EU, like that of the French and Dutch, is shifting. Their willingness to uncritically accept the integrationist project irrespective of its impact is giving way to a more sophisticated engagement with each issue on its merits.
Significantly, a 2004 Eurobaramoter poll conducted six months before the referenda in France and the Netherlands indicated that only 28% of the Southern Irish electorate were in favour of the Constitution. The corresponding figures for France and the Netherlands were 48%and 63% respectively. That the No campaigns in these two countries were successful in spite of these starting points clearly indicates the potential that exists here.
Nobody believed that France and the Netherlands, two of the EU’s founding members, could reject the Constitution, but they did. We in Ireland can repeat the same success.
That Sinn Féin will be the only political party of significance campaigning against the Treaty provides us with the opportunity to both define and lead the EU-critical position. The success of the campaign will be determined in large part by what we say and do and crucially what level of resources we invest.
However, in order to win we need to radically rethink the form, style and content of our campaign. It is not enough merely to say No. We need to carefully articulate our Euro-critical message by honestly and simply explaining why the Reform Treaty is bad, and what alternatives we would put in its place.
We need to explain why the Treaty will undermine Irish and European democracy. We need to demonstrate how it will lead to a more militarised EU, playing a more negative role in conflicts around the world, further eroding Irish neutrality. We need to convince people that the end of the Social Europe project is enshrined in the text of the Treaty, accelerating the advance of neo-liberalism and further undermining public services and economic justice.  We need to argue that human rights, civil liberties and global justice will all be undermined rather than advanced if this Treaty becomes law.
Crucially we need to demonstrate that there is an alternative. That a democratic, social and peaceful European Union is possible based on the values of sovereignty, participative democracy, equality and respect for human dignity and rights.
Such a campaign can have no truck with right wing ‘Eurosceptics’ or anti-European scaremongering and misinformation. We need to provide intelligent, informed and honest leadership about where the EU is heading, what this means for Ireland and what other paths are available.
In doing so we can redefine Sinn Féin as both the credible and radical alternative to the failed politics and policies of Fianna Fáil and Fine Gael. We can utilise the campaign to build a Southern layer of party leadership – competent, fluent and sharp in public debate and able to take on anything the other parties have to offer.
We can also use the campaign to energise our activists and supporters while at the same time engaging that progressive section of the electorate who continue to choose Fianna Fáil, Labour and Greens despite the failure of those parties to provide meaningful solutions to so many of Ireland’s social and economic problems.
A strong referendum campaign would place Sinn Féin in poll position to maxamise the political and electoral opportunities available in 2009. A referendum victory would mean that despite all the odds we managed to convince a majority of the voting population of the state that our analysis of the EU is correct.
The implications of such a result, for our party, our struggle and Irish politics more generally would be profound. Another Europe is possible, its up to Sinn Féin to lead the way.
An Phoblacht
44 Parnell Sq.
Dublin 1
Ireland