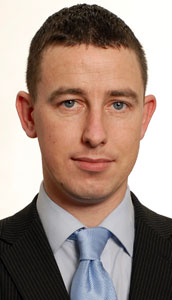 South Dublin Sinn Féin representative Shaun Tracey has said that the cost of private rented accommodation in Dún Laoghaire/Rathdown along with the lack of social and affordable housing is resulting in overcrowding of local authority housing as second and third generations of families are finding it increasingly difficult to find homes for themselves.
Speaking this week as a Central Statistics Office report showed that private rents in Dún Laoghaire Rathdown are the highest in the State Mr. Tracey said:
“A report from the Central Statistics Office published today shows that rents for private accommodation in Dún Laoghaire/Rathdown are the highest in the State at nearly €275 per week. This, coupled with this council’s terrible record for the provision of social and affordable housing, is leading to overcrowding of local authority housing or in accommodation that has since become too small for their own families.
“Young working couples, many with young children, are simply being priced out of both the housing market and the private rented sector and, in the absence of any social housing, are being forced to live with their parents in overcrowded conditions.
“This situation must not be allowed to continue. Sinn Féin believes housing is a basic inalienable human right and we have called for this to be enshrined in the constitution.
“We are calling on Dún Laoghaire/Rathdown County Council to immediately stop capitulating to the builders and properly enforce Part V of the Planning and Development Act 2000 to ensure 20% of all new housing developments for social and affordable housing.
“Given the amount of development throughout the borough, serious inroads could have been made to house many of those on the waiting list if Part V had been properly implemented.
“With the worst social housing record in the State and the highest private rents, the housing crisis in Dún Laoghaire Rathdown unfortunately looks set to get even worse.”
An Phoblacht
44 Parnell Sq.
Dublin 1
Ireland