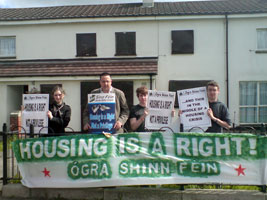 Last Thursday, 16 August Ógra Shinn Féin launched throughout Dublin its campaign to highlight the vast quantity of housing opportunities left unused in the city whilst tens of thousands of people, with more every year, are in need of suitable affordable housing.
Ógra Dublin Chairperson Oisin Dolan said:
“Many young people from the city or wishing to pursue college and careers in the capital are forced to leave Dublin due to extortionate rents and poor quality accommodation.
“Government refusal to deliver social and affordable housing is resulting in the slow destruction of communities, where those who cannot afford the massive asking prices of private profiteers are forced to leave the place where they grew up and commute from inadequately serviced towns. The youth of Dublin have a right to live in Dublin, in affordable and acceptable housing.
“Throughout the city there are boarded up houses, with many of them needing little work in order to make them habitable. Instead they are left to gather dust and keep up property prices for speculators.
“Ógra Shinn Féin is calling on the government to open up these houses, refurbish those that are in need of it and take the steps towards delivering a focused public housing programme that delivers housing as a right not a privilege.
“Delivery of suitable housing cannot be solely the responsibility of the private sector, nor should it be left up to how much money can be squeezed from young people in need of place live or raise a family. It is the obligation of the state to provide for its future, cherishing its children equally as it says in the proclamation of 1916.
“We can stop the destruction of our communities. We can create viable public housing schemes, which suit the needs of every part of the community. Support our campaign and tell the government. Housing is a right, not a privilege.”