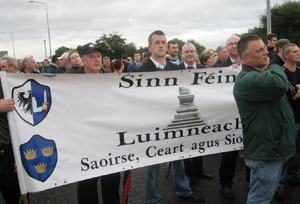 What is the big deal about Aer Lingus pulling the profitable air route from Shannon to London Heathrow? Why such a fuss? It is only one route and sure hasn’t the Mid-West still got Ryanair connections to London?  And therein lies the problem. Those opposed to the Aer Lingus decision have been invariably described as “whingers” and “exaggerators” by several media and government commentators. Simply put, the Shannon-Heathrow route is an essential part of the infrastructure for maintaining the economic wellbeing of the entire Mid West and indeed most of the western region. Therefore perhaps the most frustrating aspect of the ongoing controversy over the loss of Shannon’s Heathrow link is the failure among commentators on the east coast to grasp the gravity of the situation.
Our concerns are not just about the loss of 45 jobs for Aer Lingus employees based at Shannon despite the justifiable anger and sense of betrayal felt amongst the staff concerned. There is a real fear that if the Shannon region is isolated from the rest of the world trough having no Heathrow connection there will be a huge impact on our ability to attract investment and tourism to this area. Commentators who highlight the remaining connections to Gatwick and Stansted clearly also miss the point. Shannon Airport has been the fulcrum around which the economy of the Mid-West has been built. And this fulcrum in turn has always been based on Shannon’s status as an International Airport with key links to Europe’s biggest Air Transport Hub i.e. Heathrow as well as to the US. With the ending of the compulsory stop over for transatlantic flights Shannon’s future connectivity to the US is now in serious doubt. The removal of Aer Lingus’s service of four daily flights to Heathrow will effectively downgrade Shannon Airport to the status of a peripheral regional airport. Worse still it will become wholly dependent on Ryanair for any remaining links to similar peripheral locations. For an Airport with the history and international standing of Shannon to now find itself depending on Ryanair for its future is truly a sad state of affairs, particularly as the predicament the airport faces was all so unnecessary. Ryanair’s long-term commitment to Shannon Airport has not been proven and to assume we can build and sustain an economy that will have a huge part of its infrastructure dependent on the whims of Michael O’Leary is a truly frightening prospect.
Without privatisation this situation would never have arisen. Without Fianna Fáil, including Willie O’Dea as a Cabinet member, Aer Lingus would never have been privatised. That is the root cause of our problem.
The implications for the people and economy of the Mid-West of this decision could not be more serious, a  – fact reflected in the almost unique alliance of multinational companies, state agencies and trade unions in the region who have come together to demand a reversal of this decision. Indeed we marched with some strange bedfellows last Friday evening in Shannon. Key companies in the Mid-West such as Element Six, Avocent and Cook have said that this decision represents a threat to the future wellbeing of their companies. Key customers of these companies depend on the Heathrow hub link for easy access. This will be gone from January.
A comprehensive IBEC survey of employers in the Mid-West has shown that the majority of employers expect this decision will lead to job losses. When you consider that the survey was drawn from 200 companies in the region employing 50,000 people you begin to realise the seismic impact this could have on employment in the region. We are talking about potentially thousands of jobs that stand to be lost.  Then there is the damage done to prospects for future investment. The region will find it extremely difficult to attract any additional investment and will clearly struggle to hold what we have. The companies surveyed had 13860 employee flights and more than 45000 customer flights on the Shannon Heathrow route last year. When you analyse the impact of these figures on client/customer relations, investor relations, and prospects for future investment and growth you quickly realise that the impact of this decision cannot be underestimated, whatever the Minister for Transport might think. This is before we consider the impact on Tourism for the region. We don’t need to speculate on what this impact may be – we already know. Dromoland Castle have put a planned €200 million  investment on hold as a direct result of this decision. Other Tourism groups have made similar decisions, so job losses are already kicking in as a result of this disastrous decision.
If the threat of thousands of job losses and serious damage to future investment prospects faced Dublin there is little doubt that the government of the day would take action. However, it is the Mid-West facing this calamity and unbelievably the government has sat on its hands, happy to watch this disaster unfold.
Mid-West Fianna Fáil Ministers posing as members of the Opposition are fooling nobody on this issue, and bring to mind the late Jim Kemmy’s description of the Current minister for Defence – Mighty Mouse in Limerick, Mickey Mouse in the Dáil.
It is incumbent on the government to take whatever action is necessary to ensure that full Heathrow connectivity with Shannon is retained. If not, it will have disastrous consequences for current employment, future investment, and Tourism.
Limerick City, the closest city to Shannon airport, already suffers from the highest unemployment figures in the state. The Government’s failure to act also makes a mockery of its supposed commitment to a balanced regional development. Fianna Fáil is responsible for this mess, as without privatisation there would have been no threat to the Shannon flights. This does not have to be at the expense of the Belfast investment.  Aer Lingus have other options to deliver slots to Belfast.

• Maurice Quinlivan is the Sinn Féin representative for Limerick East