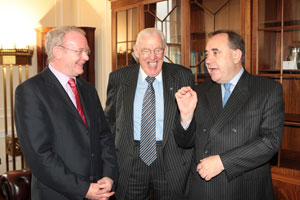 Alex Salmond with Martin McGuinness and Ian Paisley at Stormont

British state is in constitutional flux

“No man has the right to fix the boundary of the march of a nation; no man has a right to say to his country, ‘thus far shalt thou go and no further’”. Yes, the words of Charles Stewart Parnell are the first words you read when you open the Scottish Government’s recently published white paper on independence. Launching the document, Choosing Scotland’s Future, First Minister Alex Salmond heralded ‘a new chapter in Scottish politics’.
The white paper outlines three options for Scotland’s future: the status quo, advanced devolution with more powers for the Scottish parliament and independence. The SNP have long argued for a referendum on independence and now appear to be open to the idea of a multi-question referendum including the possibility of redesigning the devolutionary settlement.
The difficulty for the SNP is the parliamentary arithmetic. Only 50 of the 129 MSP at Holyrood support independence and the unionist parties of Labour, Conservatives and Liberal Democrats have already vowed to work together not just to block independence but to block any referendum. The nationalist strategy to overcome this is to appeal over the heads of a hostile parliament directly to the people. This ‘national conversation’ is intended not just to stimulate debate on future constitutional change but also to put pressure on unionist politicians. It is hoped that people outside the parliament, irrespective of their view, will demand the right to democratically decide the issue through referendum.
All of this comes at the end of the new administration’s first 100 days in office. A period even their opponents concede has been a remarkable success. The odd well chosen fight with Westminster coupled with populist policy initiatives such as the decision to keep open Accident and Emergency departments previously earmarked for closure under Labour has seen them set the agenda and leave opponents floundering. Current opinion polls put the SNP at 48% and the approval rating for Alex Salmond at a historic high. There has been no ‘Brown Bounce’ north of the border.
The SNP’s minority government status will provide numerous opportunities for parliamentary ambushes but this will require coherent opposition. The Labour party in Scotland, still trying to come to terms with its first election defeat in 50 years, will shortly appoint Wendy Alexander as its new leader. Alexander, sister of British cabinet minister Douglas Alexander and close ally of Gordon Brown, has her work cut out to restore the fortunes of the party. Their electoral hegemony was built on the twin foundations of local government domination and strong trade union support. The introduction of proportional representation in local government elections has seen the party lose a good percentage of their councillors and control of all but two Scottish councils. With trade union membership now largely confined to the public sector the party is finding it increasingly difficult to find the funds and the activists to fight elections. Whether appointing someone so closely identified with the party’s London leadership will help their task of challenging buoyant nationalists is open to question.
It remains unlikely there will be a referendum. It seems certain the unionist parties will use their parliamentary majority to defeat the government proposals. While the SNP want a referendum and, of course, independence defeat over the issue in the coming months will be far from the end of the matter. The SNP will be able to argue that they have fulfiled another manifesto pledge just by putting the matter before parliament. Unionists will be blamed for denying the people their right to choose. Furthermore, while the future may look bleak for the current white paper, the prospects of increased powers for the parliament are far brighter.
For the first eight years of devolution nothing much changed beyond presentation. With Labour in power at Westminster, Cardiff and Edinburgh and no viable Assembly in Belfast any constitutional crisis was averted. Contrast that with the present situation, which sees nationalists in government in each of the devolved institutions and the possibilities open up. Previously many Scottish nationalists had viewed independence as a case of all or nothing. Now there is growing acceptance that independence is a process rather than an event. The progressive shift of powers away from the centre is set to continue and even accelerate.
Ireland has been central to the current debate with the SNP talking up the prospect of increased co-operation with the Belfast Assembly through the reinvigorated Joint Ministerial Committees. With Scotland due to host the British Irish Council in 2008 the SNP is also enthusiastic about developing a future relationship with the Dublin government. This allows Alex Salmond to break out of the UK framework and extend Scotland’s sphere of influence. For republicans these will become increasingly important sites of struggle. Allowing us to advance an all Ireland agenda and build tactical alliances as we endeavour to incrementally increase the powers transferred from London to Irish elected representatives.
Ideas such as pooled sovereignty, where independent states within these islands agree to work together on certain issues while maintaining the right and ability to go their separate ways on other issues, are being debated. There is growing consensus, even among unionist parties, that the status quo is not an option and the whole debate has moved on from whether we need further constitutional changes to how far these changes will go.
While we are not on the verge of the break up of Britain there is a sense that something significant is happening. Rather than feeling like we are approaching the end of the discussion it seems more likely this is the beginning of a process of dislocation. Those who adapt best to the new political landscape will gain most. The British state is in constitutional flux, nationalists and republicans are ahead of the game and unionists are looking increasingly like King Canute. To maintain the initiative we must develop the correct strategies for these changed times.