Irish Language : Open up the debate 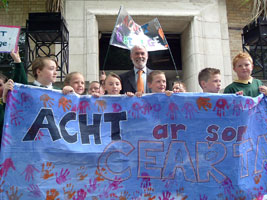 Francie Brolly with kids from Gaelscoil na Mona protesting at the BBC in Belfast, over the state run broadcaster’s lack of coverage of Irish language issues

Irish — Unionists have nothing to fear