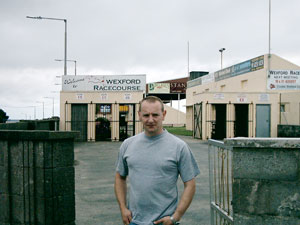 Wexford Sinn Féin County Councillor JOHN DWYER has exposed serious anomalies regarding planning rights for a proposed extension of Wexford racecourse — a project driven by Sports Wexford Ltd — the owners of the course.  Here he talks to An Phoblacht’s ELLA O’DWYER about the legal, financial and planning concerns around the project.

There’s a housing crisis in Wexford Town to this day but four years ago – between 2003 and 2004 – it was even worse with thousands of families looking for homes.  So the news that the then County Council’s Director of Housing managed to source 11 acres for the purpose of creating social and affordable housing was welcomed by most, though not all the people of the town.
“It was prime residential land looking out over Wexford Harbour and the Director got it for just €1.3 million. The same land now would cost the council something in the region of €11 million”, said Dwyer.
This parcel of land was surrounded by a racecourse and various private residencies some valued at up to €1 million.
“There was unease expressed from some sources at the prospect of a couple of thousand additional houses being built in the area and then a story was mooted to the effect that Traveller accommodation – a halting site, was to be established along with the houses. This was a ruse designed to put pressure on elected members of the council and there was intensive lobbying to have the housing project stopped and the land sold on”, said Dwyer.
It was then that Sports Wexford Ltd, the owners of Wexford racecourse got involved.
“The directors of the company are local business people and they proposed extending the racetrack at the expense of the housing project. They actually managed to buy the land from the Council for €1 million and in fact they didn’t pay even that low cost. The company got support from senior members of the County Council at that stage. The council of the time voted unanimously in favour of selling the land to the company.”
John Dwyer is appaled by the whole matter.
“I think it’s a disgrace and totally immoral. To make matters worse the company went on to develop the land without handing over any money and while the land was still zoned for housing and without planning permission. Wexford County Council appears to have turned a blind eye.”
The council also tried to infer that, because the racecourse would not be used for more than 30 days a year, there was no need for planning permission. This is not true as Councillor Dwyer explains:
“The races are a fixed event – that is to say that it’s not like a field day or a carnival after which the props and material could be moved from the sight. The company also built a clay bank on the site despite a ruling in law that says that the minute you turn a sod of ground you must get planning permission.”
But this is not the biggest issue for Dwyer.
“Wexford Sports Ltd signed contracts for €1 million. It was a theoretical figure in that it was never going to be paid. Of that €1 million, an upfront grant on €200,000 was supplied by Wexford County Council to the company to help them with the development. That brought the price of the land down to €800,000. Then provision was made by the council that €300,000 was to be paid by the company over a ten year period at a rate of €30,000 a year leaving €500,000 to be paid up front on completion of contract. But in the meantime additional council grants – and very substantial ones – were given to the company along with a further grant from Horse Racing Ireland which is a state owned company. No money at all was handed over.”
The contracts were only signed off on and completed a couple of months ago and there is no evidence of any money being passed over.
“Nothing has appeared anywhere in the budget to suggest payment was made”, Dwyer said.  The County Manager has refused to provide the relevant documents for inspection even to elected members.
“These are public documents and the taxpayers have a right to know where their money went. In fact one senior member of Wexford County Council tried to deny the land was ever zoned for housing but for Recreation and Amenity which is not the case”, Dwyer said.
Councillor Dwyer wrote to the County Manager in recent months to enquire as to what was happening and got no reply. He also raised the issue at council meetings only to be told that he was scare mongering and calling council officials liars.
He says that the council was in denial – particularly those who were members of the council at the time.
Dwyer also wrote to the Local Government Auditor to question the value for money factors involved in the sale of land currently to the value of €11 million for a nominal sum of €1 million, which in the event was never paid by Sports Wexford Ltd and in fact came out of the taxpayers’ pockets. The auditor acknowledged the query and said he would investigate.
John Dwyer has also written to Environment Minister John Gormely who confirmed that he would look into the matter and to Junior Minister for Agriculture Trevor Sargent who has the remit for horse racing.
As far as Dwyer is concerned there are issues around zoning, planning, value for money and even legality involved. He is calling for an independent inquiry into the matter with regard to the procedural, legal and accountancy aspects. Wexford County Council have since conceded that the land remains zoned for housing and not under the Recreation and Amenity criteria as previously suggested.
Dwyer is hopeful of a positive outcome.
“We’ve a strong case on many fronts. The bottom line is that the racecourse extension must be halted and badly needed houses provided for the people of Wexford”, he said.