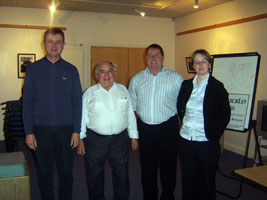 Abhaile Arís the Republican ex-prisoners group based in Letterkenny hosted a very successful night of “Hearing Other Voices” in the County Museum Letterkenny on Thursday night last week.
The evening was organised under the auspices of Abhaile Arís PNB programme. The “Process Of Nation Building” programme is based on celebrating Diversity, Building Relationships and Promoting Change within our society.
The programme is an evolution of work commenced by Coiste Na n-larchimí through its political education work under PEACE 1.
It seeks to enable republican ex-prisoners to access opportunities to reflect upon, investigate and strategise with key sectors of Irish society North and South, and upon divisions and opportunities for building a nation rooted in a respect for diversity and commitment to justice and peace.
In introducing the speaker for the evening former Apprentice Boy Mr William Temple from the Fountain area of Derry, Abhaile Aris Outreach Worker Gerry McMonagle said: “Willie and I both come from working class estates on the Cityside of Derry just half a mile apart. And yet the context of the conflict on this island has left a much wider political gulf between our respective positions. Bridging that political gulf with new understandings which are based on mutual respect is a key aspect of the PNB programme”.
He went on to say that his fervent hope is that “the new directions and better relationships being built throughout Ireland will point the way towards a future where Catholic, Protestant, Dissenter and the new Irish can all live together on the Island in a spirit of mutual respect and on a foundation of equality”.
William Temple a former president of the Murray Club Apprentice Boys and a member of the Loyal Orders for 50 years thanked Abhaile Arís for the invite saying it was a pleasure to come to Donegal and give the talk.
Temple went on to outline where the Apprentice Boys emanated from and what they were set up in the first instance. He outlined their history up to the present day explaining to his attentive audience that there were eight parent clubs in total. All of the clubs were named after events or people associated with the Siege of Derry in 1688.
Temple gave a brief outline on the Siege of Derry and on how the siege was lifted after 105 days when ships broke through a boom on the River Foyle at Culmore and brought much needed supplies to the beleaguered residents of the walled City which had swelled from 2,000 to 30,000 during the siege with a third of those within the walled city dying of injuries received or diseases contracted during the 105 day siege.
He also talked about the other Loyal Orders namely the Orange Order and the Black Perceptatory. All of which he said had their own identity and were not linked in any organic way to each other.
At the end of his talk which lasted almost an hour, a lively question and answer session followed and all who had attended spoke of their enjoyment and surprise at some of the revelations of the evening’s engagement. They also praised the good work that is being done by Abhaile Arís through its PNB programme and wished them well in the future.
An Phoblacht
44 Parnell Sq.
Dublin 1
Ireland