Healthcare is a Right Campaign to be stepped up 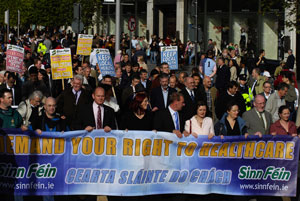 Following the Health Services Executive’s (HSE) awarding tenders to a number of private consortiums last week to build private hospitals on public hospital land Sinn Féin’s Ard Chomhairle decided on Saturday, 7 July to step up its Healthcare is a Right Campaign throughout the 26-counties.
Speaking from Sinn Féin’s Head Office where the Ard Chomhairle meeting took place Dublin MEP Mary Lou McDonald said:
“The approval by the Board of the Health Service Executive of successful bidders to develop private for-profit hospitals on public hospital sites represents the privatisation of our health services.
“Co-location has been widely opposed both within the health services and across the country, most recently by ICTU and also SIPTU and the INO who have warned against the cherry-picking of private above public patients. Co-location will reinforce the two-tier public-private system. It will make it more difficult to introduce essential reforms such a single hospital waiting list for all patients.
“While the Fianna Fáil/PD/Green government awards massive tax breaks and access to public land to private hospital developers, it continues to downgrade local hospitals. What we are seeing is loss of local services and ruthless over-centralisation for the public hospital system while the private hospital sector is subsidised by Government to develop services based on profit not on need.
“Major concerns have also been raised about the corporate background of companies intending to develop the co-located private hospitals. Their parent companies have been mired in fraud in the United States where privatised healthcare is a social and economic disaster.
“Sinn Féin will continue to oppose the privatisation of our health services and campaign for a renewed and reformed equitable healthcare system for Ireland.”