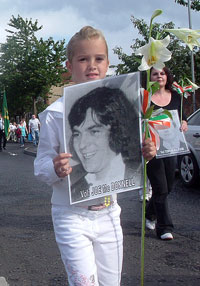 The welcome break in the unseasonal weather, which saw Belfast drenched in heavy showers over the past week, coincided with the timing of last Sunday’s commemoration march for Hunger Striker Joe McDonnell.
As many as 1,500 to 2,000 people assembled at the bottom of Lenadoon Avenue before parading to the Roddy McCorley club for a rally addressed by Sinn Féin assembly member Alex Maskey, John Finucane son of assassinated human rights lawyer Pat Finucane and Elizabeth Livingstone whose sister – 13 year old Julie – was shot dead by a British soldier.
It was poignant that the march assembled at the spot where young Julie was cut down in that bleak year of 1981. That was the year in which British Prime Minister Margaret Thatcher unleashed a vicious onslaught against the Irish people. It was the year Thatcher allowed 10 men to die on hunger strike in the H-Blocks then sought to destroy nationalist opposition to her cruelty by instructing her gunmen to cut down children such as Julie in Lenadoon, Carol Ann Kelly in Twinbrook and Paul Whitters in Derry.
Adding to that poignancy was the fact that the parade organisers brought children representing West Belfast’s GAA clubs together behind the banner depicting Bobby Sands immortal words: “Let our revenge be the laughter of our children”.
Gathering behind that lead banner were members of St Teresa’s GAC for whom both Joe McDonnell and Kieran Doherty played.
Although the commemoration was a local event, remembering Joe and other comrades from Lenadoon who have died, the organisers were heartened by the way in which republicans travelled from far and near to be present. Indeed a busload of Dublin republicans attended while representatives of the Derry republican youth group Toirise also attended.
As the crowd assembled at the Roddy McCorley club to listen to the speakers there was so many people present that those at the back of the car park couldn’t hear the speakers.
Sue Ramsey, who chaired the proceedings called on Elizabeth Livinstone to speak.
Elizabeth, in a very moving address, spoke of her family’s pain over the killing of Julie, the youngest in their family.
She criticised those who have promoted, “a hierarchy of victims”, over the years especially at this time when members of the RUC are suing the British government for compensation for the stress they say they suffered during the conflict.
“When Julie was killed, the British Government awarded my parents compensation. After they made the award they stopped their benefits. But my parents never stopped fighting for justice for Julie or the others killed by plastic bullets”, she said.
Elizabeth reminded her audience that there was always one set of rules for the British and another for the Irish.
When John Finucane spoke he addressed the issue of collusion, but in a personal  opening to his speech he  spoke of how he missed his father and spoke of the uncle he never knew, Volunteer John Finucane, who was amongst those being remembered that day.
His speech was a reminder of the deeply human and personal cost of Britain’s war in Ireland and the policy of collusion that led to the deaths of hundreds of Irish people.
The last speaker of the day was Sinn Féin Assembly Member Alex Maskey.
Maskey thanked the crowd for their attendance and told them that it was through their hard work, as republican activists, that we had achieved so much.
“And even though we have achieved so much, having survived the hard times, the collusion, the Hunger Strikes and the shoot-to-kill we still have a lot to do before we achieve the united Ireland our comrades fought and died for.
“I have confidence that we will bring about a united Ireland because we are strong and we are united”, concluded Maskey.