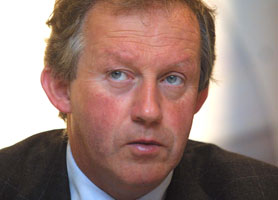 Amid growing political controversy, former Progressive Democrat junior Minister Tom Parlon, who lost his seat at the recent 26 County general election, is to take up a position as Director General of the Construction Industry Federation (CIF).
As part of his role in the last government, the former Laois-Offaly TD oversaw the Office of Public Works, which gives out lucrative contracts to construction firms.
The Irish branch of global anti-corruption organisation, Transparency International is now calling for new regulations to prevent the situation whereby ministers can “make decisions with one eye on future employment prospects”.
Sinn Féin Housing spokesperson Arthur Morgan TD has said that the move demonstrated the necessity for post service restrictions on former government ministers and senior civil servants to prevent them unethically utilising knowledge from their public employment to the benefit of the private sector.
“The influence of the construction industry over the Government has long been a cause of major concern. This is recognised as one of the key factors behind the Government’s failure to tackle the escalation of house prices over the last decade despite the impact price increases were having on ordinary people trying to secure homes. Appointments such as Parlon’s will make the public even more cynical about the nature of the relationship between the Government parties and the construction industry”, Morgan said.
“Sinn Féin is seriously concerned that Tom Parlon who served as a Minister of state in the Department of Finance in the last Government is now to take up the position of Dictator General of the Construction Industry Federation. We fear that this may result in sensitive knowledge garnered from his time in Government now being passed on to the CIF. For example the Government refuses to give the public specific information regarding Transport 21 because of the sensitivity of this information in terms of the procurement process – this is the kind of information that the CIF will be delighted to now have access to through the appointment of Parlon.
“Sinn Féin is calling for the introduction of post-service restrictions on key personnel within the public sector, including government ministers and senior civil servants, to prevent them unethically utilising knowledge from their public service/employment to the benefit of the private sector. Such restrictions are the norm for many within senior management positions in the private sector to prevent confidential knowledge being passed on to competitors. The public sector and the public interest must be protected in the same way.” Meanwhile Arthur Morgan has said that the scale of mortgage debt revealed in a department of environment report this week did not surprise him. Sinn Féin according to Morgan repeatedly challenged the Government over recent years on their repeated claims that there were no affordability problems in the housing market and in relation to the fact that first time buyers were precariously over-borrowing for overpriced houses.

Huge profits
“Those who have creamed off huge profits as a result of the property boom of recent years – banks and estate agents in particular – misled the public to believe that the housing boom would continue forever and that house prices would continue to rise. This was never going to be the case. Those of us who raised concerns were dismissed as scaremongers”, Morgan said.
“When challenged over the last number of years the Government continually claimed there were no affordability problems in the housing market. They made this claim despite the evolution of the 100% mortgage and the 40 year mortgage and the fact that young couples were borrowing unprecedented sums at a time of historically low interest rates. Numerous reports pointed to an overvaluation in the housing market. Yet the Government failed to act. A situation likely to lead to huge problems in the time ahead was allowed to flourish.
“Negative equity (where you have a property that is worth less than the amount outstanding on the mortgage) and house repossessions are now real dangers for many people.
“The Government refused to intervene to curb house price increases – indeed their policies including specific tax reliefs contributed to the unprecedented escalation of house prices over the last decade. This failure is the chief reason for the dire predicament which new homeowners now find themselves in. Sinn Féin repeatedly pointed out that each day the Government failed to act, more young couples over borrowed for overpriced houses and placed themselves in serious risk of facing a situation of negative equity. Negative equity will be a real problem for those who took out 100% mortgages as house prices peaked in 2006. The Government also must take responsibility for failing to adequately warn people of the risks associated with 100% mortgages”, said the Louth TD.
“The Government will have to clean up this mess which is of their own making. Government policy must seek to intervene to prevent principal home owners defaulting on loans and facing repossession of their home. Innovative policy proposals need to be developed to address this developing situation. More can and should be done in terms of mortgage interest relief to help protect vulnerable homeowners in particular those on average and lower incomes”, he said.