Historical status of Long Kesh must be maintained 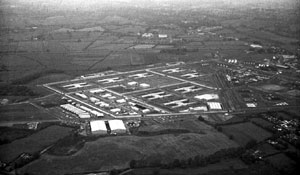 Removing the historic status of the former Long Kesh prison and hospital wing where Hunger Strikers died would be ludicrous, Martin McGuinness has said.
Some unionist politicians have objected to the creation of what they claim will be “a shrine to the IRA” at the Long Kesh site while unionist MEP Jim Allister wants the buildings to lose listed status.
Sinn Féin has called for the creation of a conflict transformation centre on the site.
Deputy First Minister in the Six Counties, Martin McGuinness has said the former jail was a “project of international importance”.
“I would be shocked if any minister in the Executive thought it was a good idea to de-list the buildings,” the Sinn Fein minister said.
“It would run totally contrary to everything that we are trying to do in terms of attracting people to our country to learn from what is clearly a whole new experience for us.”
McGuinness said many people had “looked at this place as a place where there was no future and there was just perpetual conflict”.
“Now we have come out of all of that, we have a lot to offer the world.”
A 35,000-seater stadium for GAA, soccer and rugby is planned for the Long Kesh site, but opponents argue the stadium should be built in Belfast instead.
DUP leader Ian Paisley has already opposed rival plans to locate the stadium at Belfast’s Ormeau Park.
This week Sinn Féin MLA Paul Butler said there is no viable alternative to the Long Kesh plans put forward by the Maze/Long Kesh Monitoring Group which all of the political parties agreed to.
If the stadium is not built at the Long Kesh site then it is unlikely that any stadium will be built.
There is huge interest around the world in the successful peace process here.
The International Centre for Conflict Transformation at Long Kesh would be a showcase for the success of the peace process.