Miscarriage of Justice : Development likely to encourage other victims 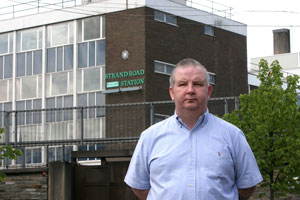 McMenamin case should never have gone to trial, judges admit

Derryman Charlie McMenamin against whom  trumped up charges were quashed on appeal last month, has said the lengthy legal battle to clear his name has been worth it - if it means others are spared the abuses he suffered. McMenamin was speaking after three Appeal Court judges presented their final submissions to the High Court in Belfast in which they ruled the case against him should never have gone to trial. They upheld all of the concerns raised by the Criminal Cases Review body.
The way is now clear the way for McMenamin to pursue aggravated damages but he insists compensation should be automatically awarded in cases where a clear miscarriage of justice has been exposed. McMenamin says he will now have to “jump through hoops” to win his entitlement.
Charlie McMenamin, who was 16 at the time of his interrogation, signed false confessions written by his RUC interrogators, following almost three days of physical and mental torture.
Despite being a juvenile, he was refused a legal representative or an independent adult.
The latest development is also likely to encourage others who while underage were denied access to a solicitor, to seek to have their convictions overturned.
McMenamin’s solicitor has said the case for aggravated damages was strengthened by the Appeal Court’s final conclusions.
“The judges concluded that this man could not have been guilty of the charges brought against him. And we will be pursuing the Secretary of State for compensation”, he said.
“The DPP’s direction that some of the charges should have been dropped, didn’t happen  and that enhances the claim for compensation for the three years Mr McMenamin spent in custody.”
Paddy McDermott, added the successful outcome of the McMenamin challenge, may encourage other victims to seek redress.
“Anybody who made statements under 18-years-of-age without access to either a solicitor or another adult certainly have grounds for seeking to have their convictions quashed - even if they pleaded guilty.
“This decision confirms the Mulholland ruling that the conviction of anyone underage is unsafe”, he said.
But Charlie McMenamin pointed out: “I never expected an apology from the state - after all this was a system that allowed those things to happen. What’s important for me isn’t the compensation - it’s the scrutiny that ensures that what happened to me cannot happen to anyone else.
“My legal representative will seek compensation - that’s the next step.
But the long-drawn out nature of these processes leaves a lot to be desired.
“When convictions are quashed on appeal - compensation should be automatic. Yet despite what I went through, I’ll now have to jump through hoops to even pursue that - and that’s unfair.”
He continued: “I was never ashamed of being in prison, after all I was imprisoned because of the political climate at the time and was therefore a political prisoner. I certainly wasn’t ashamed of the people I  knew in prison, we were all political prisoners - many of them are still amongst my closest friends.
“I wasn’t that political when I went in - but by the time I came out I was seething with hatred for the system.
“What I went through changed me and because of the way I was treated, it also had a profound effect on many of my friends.
“After the Guildford Four, the Birmingham Six, the Maguires - the British establishment knew it had to change the system.
“This has been a tough process but the circumstances never existed before to challenge the British judicial system with any real confidence.
“And I’m glad that I’ve seen it through to conclusion.”