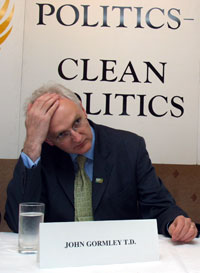 Minister for the Environment, John Gormley

While hopes were raised that damage to the Gabhra Valley at Tara, County Meath recently named one of the world’s 100 most endangered sites by the New York-based World Monument Fund, might be averted with the discovery of a National Monument at neraby Lismullen last month, these were dashed when former Minister for Environment Dick Roche approved the destruction of the Lismullen monument during his last hours in office.
Campaigners have called on the new Minister for the Environment, the Green Party’s John Gormley, to reverse Roche’s decision and re-route the road. However Gormley said last week that he could not overturn judicial decisions already made in relation to the monument at Lismullin and the approval of the M3 route.
A delegation from the EU Petitions Committee visited the Tara and Lismullen sites On Wednesday, 27 June. The delegation met two of those who had sent them petitions - transport researcher Brian Guckian and Julitta Clancy of the Meath Archaeological and Historical Society and members of the Campaign to Save Tara.
A number of petitions have been lodged with the EU in relation to Tara and Guckian’s petition was based on the fact that the planning process ignored other transport options such as rail. Following the meeting with the EU delegation he criticised the Irish Government’s “negligent treatment of our environment, heritage and culture”.
The controversial plan to build the M3 through the historically important valley close to the Hill of Tara, former seat of the Irish High Kings, has been in place since 2002 and has been condemned by Sinn Féin. While the party supports the call for a motorway in the region, it has called for the road to be re-routed away from Tara so that long suffering commuters in Meath can benefit without detriment to such an important Irish and world heritage site.
Sinn Féin TD Aengus Ó Snodaigh has described the government’s failure to protect Ireland’s archaeological and architectural heritage as “disgraceful”.  He said that while Sinn Féin supports the upgrading of the country’s roads this did not have to be done at the cost of the wholesale destruction of the environment or national heritage.
The crisis hanging over the Tara Valley has also been raised in the Dáil on several occasions in the form of Parliamentary Questions by Sinn Féin TDs Arthur Morgan and Seán Crowe.
Sinn Féin Meath County Councillor Joe Reilly has been agitating on the issue since the M3 route was initially proposed.
Reilly had welcomed the government order stopping work on the M3 Motorway following the discovery of the massive pre-historic site at Lismullen and reiterated Sinn Féin’s long-held position that Tara and its surrounding hinterland are of huge significance in terms of Ireland’s history and heritage.
“There is a viable alternative route for the motorway that has been proposed by Sinn Féin. The Minister must now take this route into consideration”, Reilly said at the time.
This week, David Joyce of Ógra Shinn Féin said the whole idea of a motorway and interchange so close to what is a such an important archaeological site was “nauseating”.
He said Tara was of critical importance for Irish people as a symbol of national identity and should be treasured and protected by the government.
“The fact of the matter is the road can be redirected west of Tara. This would cut the length of the motorway by seven kilometers, cut costs by up to €80 million and most importantly rescue one of Irelands most important pre-historic complexes.
“What is particularly disturbing is the Green Party’s excuses since it has entered government with Fianna Fáil. Minister Gormley now claims he is powerless to stop the M3 from proceeding after its approval by the former Minister. If the Greens think that the Irish people will accept this blatant lie they are wrong. It is obvious that the building of the M3 was a concession made by the Greens to Fianna Fáil in their pre-government negotiations. This is in stark contrast to the pre-government green position that pledged to save the Gabhra valley, and even had it as one of their most important issues on their election manifesto.
“Another disgraceful note on this issue is the proposed double tolling of the M3. This is further proof of Fianna Fáil’s alliance to big business. The M3, funded by the public exchequer is going to be privately owned and commuters in Meath may have to pay two tolls on their way to work in the morning and two on their way home. This just demonstrates the power money wields in our country in this day and age.
“Meath Ógra Shinn Féin pledges full support to the campaign to save Tara and have the M3 re-routed away from the site of massive historical importance and to bring and end to the destruction to our national heritage.”