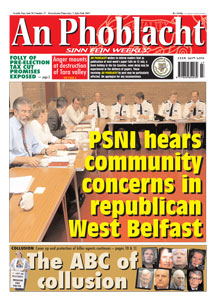 Sinn Féin President and West Belfast MP Gerry Adams co-hosted a meeting on Tuesday evening in the Upper Springfield area of his constituency to which he invited PSNI Chief Constable Hugh Orde for the first time.
Adams extended the invitation at a meeting last week with Hugh Orde and PSNI Commanders to discuss community concerns about policing in the upper Springfield area. It comes amidst engagement over recent months by community leaders and local political representatives with a range of other statutory bodies and public authorities in an effort to tackle anti-social behaviour and criminality in Ballymurphy. The meeting also formally established the Upper Springfield Safer Neighborhoods
“Sinn Féin is working to open new space for the local community and criminal justice agencies, especially the PSNI, to work together and fulfill their obligations to uphold the rights of those who want to live in Ballymurphy in safety and peace, free from intimidation and threat.”
Later on Tuedsay, opening the meeting in the Whiterock Community centre to Forum Gerry Adams said:
“There are 680 families in Ballymurphy and 12,000 people living in the upper Springfield area.
“There are many social and economic pressures and disadvantages which press down on this community. There have been numerous self-help and community initiatives organised to rectify and correct these injustices. And there is much more to be done to give local people their social and economic rights.
“The people of this area have lived through the worst years of recent conflict. They are not people of violence - they are people of character and courage. They are a proud community and have shown a resolve and resourcefulness, which should be commended.
“I want to commend everyone who has contributed to the well being of this community. Tonight in particular I want to commend the community activists who have worked under great pressure to deal with anti-social and criminal issues, which beat down on people here.
“There is no Ballymurphy feud. There have been two criminal gangs at war with each other and the community around them.  The serial violence perpetrated against people and property in the greater Ballymurphy area is the responsibility of a small number of people.
“Originally, these people were involved in a feud between two families and their violence has since evolved into a pattern of anti-social activity, some of it of a very serious nature including murder, attempted murder, threats to kill, arson attacks, car theft, death driving and burglaries.
“The people of the Upper Springfield have the right to live free and in peace. Only a tiny minority of people is engaged in this totally unacceptable behaviour. The vast majority of citizens in this area are law abiding and responsible people.
“In the build up to tonight’s meeting, a Task Force involving statutory, community and local elected representatives for the upper Springfield has been meeting over the last three months.
“This initiative has two purposes: to effectively tackle anti-social behaviour and criminality for the people of Ballymurphy and wider community in the upper Springfield area; and to ensure through engagement between republican communities and the PSNI that people get the policing service we are entitled to.
“There is a responsibility on Hugh Orde and his colleagues to play a positive role in a multi-agency strategic approach under the auspices of the Upper Springfield Safer Neighbourhoods Forum, where community organisations and statutory agencies can critically engage in ensuring the safety of the local community.
“Sinn Féin is encouraging anyone with information about any crime to go directly to the PSNI. Some people have come forward and have subsequently complained about the failure of the PSNI to respond to their requests or to fully investigate criminality. Others have not, because they do not have the confidence that the policing and justice system is working for the local community or with the local community.
“A dossier was compiled by the local community. It represented a sample of specific complaints and illustrates the flawed approach to policing with the local community. We gave that to the PSNI and had a constructive exchange last week about community views.
“I know that similar criticisms and concerns have been raised about other statutory bodies, especially criminal justice agencies. There are concerns about information being withheld from the local community, about bail conditions, supervision arrangements, the dropping of prosecutions etc.
“But this meeting is not about recrimination. It must be about the way forward. Sinn Féin’s objective is to open new space for the local community and criminal justice agencies, especially but not only the PSNI, to work together to uphold the rights of those who want to live in Ballymurphy in safety and peace, free from intimidation and violence.
“It is positive outcomes which will engender confidence in the Ballymurphy community, throughout the upper Springfield and across the six counties. It needs all statutory bodies working together.
“It is also going to require an investment of time as well as resources to embed a new approach. I hope everyone will respond positively. Local expectations will be raised. The criminal justice agencies and the other statutory bodies need to deliver for the people of the upper Springfield.”