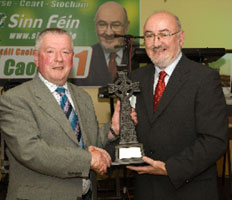 There was a capacity turn-out in the Four Seasons Hotel, Monaghan for the Sinn Féin celebration of the recent General Election result in the constituency last Saturday.
Director of Elections Cllr. Pat Treanor said the Cavan/Monaghan result was again the good news story of the election for Sinn Féin.  “Caoimhghín’s record as TD and Dáil Leader made our task the easier.  Our candidate has instant recognition and an across the board acknowledged reputation as a hard working Dáil Deputy who gives an unparalleled service to his constituents” Treanor said
Six County Minister for Agriculture, Michelle Gildernew praised the success of Sinn Féin once again in Cavan/Monaghan and paid tribute to the leadership and selfless commitment of Caoimhghín Ó Caoláin.  She reserved her warmest gratitude for Ó Caoláin’s wife Briege and their family “without whose support Caoimhghín could not function as he does”.
A presentation to Ó Caoláin on behalf of the Sinn Féin organisation in the constituency was made by Cavan County Councillor Charlie Boylan.
Caoimhghín welcomed all in attendance.  He thanked the electorate of Cavan and Monaghan, in particular the 13,162 voters who made him and Sinn Féin their No. 1 choice.
Caoimhghín Ó Caoláin thanked the Constituency Directorate and Director of Elections Cllr. Pat Treanor.  He paid tribute to his core support staff and all who canvassed, put up posters, fund-raised and helped in any way over the course of the campaign.
He congratulated the Sinn Féin organisation throughout Cavan and Monaghan on recording an historic three consecutive successes in General Elections in 1997, 2002 and now in 2007.  This was never before achieved by Sinn Féin in the party’s history in Cavan and Monaghan.
In a brief reference to his own health issues Ó Caoláin, who spent the greater part of last week in St. James’s Hospital undergoing tests, said that he was determined not to miss the planned celebration night in the Four Seasons.  Speculation during the week that the event would have to be postponed was “never on” he said.

Seanad election
Acknowledging the disappointment of the party at its overall performance, Ó Caoláin said that there was an early prospect of regaining a fifth Oireachtas member with the upcoming Seanad elections. To enthusiastic applause he recorded his hope that Cllr. Pearse Doherty of Donegal would secure a seat in the Senate in the current elections to that chamber.
Praising the Sinn Féin councillors in Cavan and Monaghan and throughout the state as  “the bedrock of all our successes” he singled out for special mention the newly elected Cathaoirleach of Monaghan Town Council, Pádraigín Uí Mhurchadha, and paid tribute to her 22 years service as an elected voice of the people of her native town.
He said it was particularly apt, that in this 50th anniversary year of her brother Feargal’s death in action that Pádraigín would hold the premier position of Honorary First Citizen of Monaghan Town.
An Phoblacht
44 Parnell Sq.
Dublin 1
Ireland