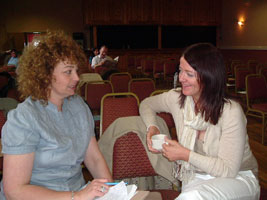 Sinn Féin in Ulster prepares for challenges of next five years

As up to 200 delegates from Cúige Uladh gathered at Knockatallon in County Monaghan on Saturday, 23 June for a Cúige Strategy Conference it was clear that the highs of the North’s recent Assembly election, the subsequent negotiation with DUP which lead to the Assembly’s re-establishment and the lows of the 26 County election were going to be central to the day’s discussions.
It was clear that the delegates from across Ulster wanted, in particular, to set the perceived setback of the 26 County election in context and see what lessons Sinn Féin as a revolutionary party would learn from the Leinster House campaign and move forward.
However the programme for Saturday’s conference was much broader than the recent elections.
Saturday was about Sinn Féin in Ulster developing strategies that would see the party taking on the political challenges of the next five years in a way that would see, as Declan Kearney put it – the full outworking of the new mode of political struggle that was created by the IRA announcement of the end of the armed struggle on 26 July 2005.
Kearney, who stood down as Cuige chair to take up a new role in the General Secretary’s office, delivered one of the day’s keynote addresses. His paper focused on, “The changing context of our struggle”, while Leo Green who heads up the party’s operation in Stormont made a presentation on Sinn Féin activists as Agents for Change and defined the role of the activist.
Green challenged people within the party to take on their responsibilities as leaders of the struggle in their areas and lead. “Spectatorism”, as Green described it, “is dead and gone. The days of republicans sitting on the sidelines waiting for things to happen has to end. The IRA statement of July 2005 has opened up space, we need to move boldly into that space before our political enemies occupy it”.
Newry based Brian Tumilty, who was elected unopposed to the position of Chair of Cúige Uladh, outlined the Vision for Sinn Féin in Ulster. Tumilty told his audience: “You are the leadership of the struggle in Ulster”. It is the business of leaders to create more leaders not more followers. And that is what we must do.”
He stressed the need for a, “joined up revolutionary movement where the sum of it’s revolutionary potential outweighs the dynamic and resourcefulness of any individual or group within it’s parts.
“We must establish structures, organisation and leadership that not only gives direction to the Cúige and enables us to deliver in key areas of struggle like equality, an teanga, policing, the Assembly, local government and the community but also are constantly delivering the best of organisational resources and service to the Cuige”.
The afternoon sessions saw Seán Murray identify questions around the type of party we need that can become the cutting edge of our struggle. He explored the way in which the party needed to set it’s work within our overall strategies aimed at achieving our primary aim of attaining Irish Sovereignty, self-determination and independence and our ultimate aim of establishing a 32 County Socialist Republic.
“The Army used to be the cutting edge of our struggle”, said Murray, “now it is the party that needs to carry the struggle and take the political fight to our enemies”.
Murray pointed out that despite the new phase of political struggle was every bit as dangerous for us as were the previous phases.
“The establishment parties, North and South were still intent on delivering political body blows to us as was the NIO.
He particularly identified the British Government’s Shared Future policy which, according to Murray is, “an anti-republican strategy that we need to confront”.
To ensure that the delegates had a focus on the type of work that was required of them Mary McArdle and Bronwyn McGahon, using a power point display went through the seven-part Cúige Work Programme.

In the course of the day there was plenty of opportunity for comrades to contribute from the floor. Needless to say the input from the activists was every bit as stimulating as the contributions from the main speakers.
A number of activists identified that Sinn Féin would have to build in the 26 Counties and that the main focus of our political work would require us to involve ourselves in the campaigns effecting people’s every day lives.
As Jim Gibney put it: “We need to consolidate our strength amongst the people we represent. The campaigning edge of the party is where we meet the people we are in struggle with and it is that campaigning work that we need to refocus on”.
Other comrades identified the uneven development of the party and felt that we needed to come out of the conference with a renewed effort to build the party with discipline and accountability.
“The party needs to be fit for purpose for the challenges ahead”, was a common view of the delegates.
It was left to Mitchel McLaughlin to bring the day’s proceedings to a close.
In a paper Irish Republicanism in Transition McLaughlin reflected on the shock felt over the party’s performance in the 26 County election. For McLaughlin the election provided a profound message that is wider than just electoral consideration
“We need to regularly – without compromising our core principles – examine and revise our policies to meet ever-changing economic, demographic and social expectations in order that we can realistically deliver the Ireland of Equals that we are striving for.
“In order to prosecute this course of action we need to work towards building real coalitions between republicans in the broadest sense of the term and all those campaigning for real and lasting change in our country.
“We need a coalition of all those seeking an end to poverty and inequality through the proper management of the wealth in the economy.
“We need a coalition of people across sectarian and racial divisions and an end to sectarianism and racism.
“We need a coalition of those in rural and urban communities who have not been allowed to take full advantage of increased prosperity.
“We need a coalition of environmentalists who will make the aim of a green, clean Ireland a reality.
“We need a coalition of those who cherish Irish neutrality and believe in the sovereignty of the people of Ireland”.
Concluding his speech McLaughlin pointed out: “We have cleared away many of the road blocks to national self-determination. But always remember the lesson of the General Election 2007. We need the agreement and permission of a majority of people in Ireland. We don’t have that yet. This is new mode politics, let’s listen and learn”.